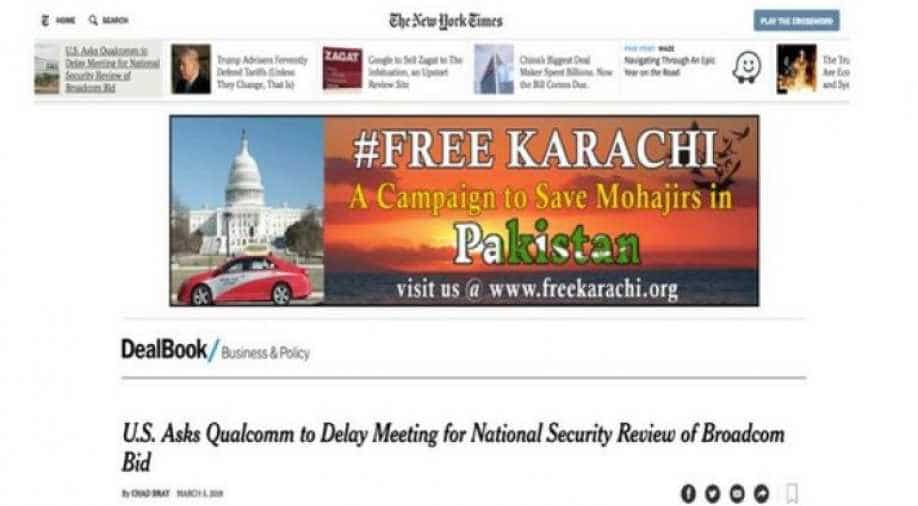 The New York Times is expected to run the Free Karachi campaign ads for at least two weeks. Photograph:( ANI )

The Free Karachi campaign continues to draw attention to the cause of ethnic Mohajirs in Pakistan.

The campaign aims at bringing to spotlight the atrocities against Mohajirs in Pakistan. The movement came into existence after the Muttahida Qaumi Movement (MQM) leader Dr Hasan Zafar Arif was found dead in a car in Karachi's Ilyas Goth area earlier this year.

In this latest phase of the campaign, digital ads are appearing on the official website of a leading newspaper of the United States, New York Times, highlighting the Mohajir issue.

The online advertisements urge the Trump administration to stop military and financial aid to Pakistan alleging that its military establishments commit atrocities against Mohajirs and provide safe havens to extremist terror entities in the country.

The New York Times is expected to run the Free Karachi campaign ads for at least two weeks. The digital advertisements will briefly explain the alleged injustice meted out to the urban population in Sindh, Mohajirs in particular.

A large number of taxis, displaying 'Free Karachi from state atrocities of Pakistan' banners, had participated in the annual MLK Day parade.

Digital ads of 'Free Karachi' ran on the Washington Times website, urging the US administration and world community to save Mohajirs in Pakistan.