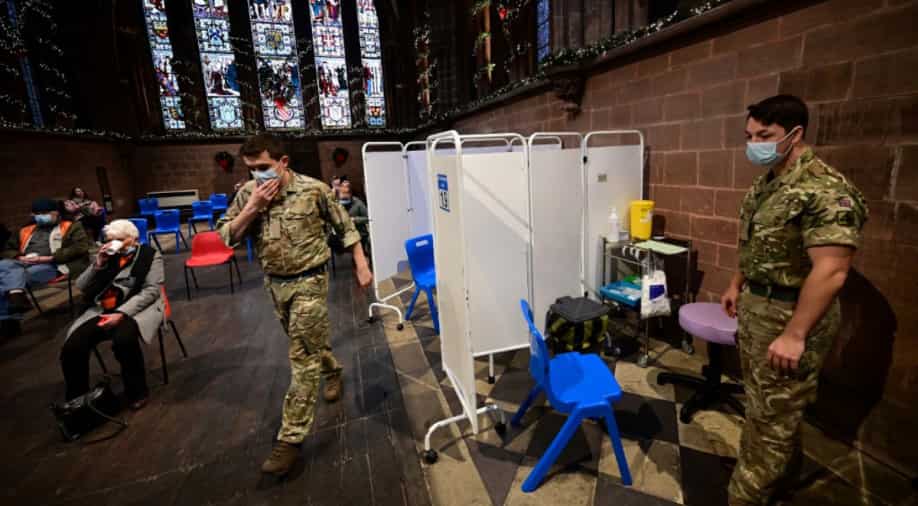 Soldiers from the Corps of the Royal Electrical and Mechanical Engineers (REME) wait for patients at a vaccination clinic set up at Chester Cathedral Photograph:( AFP )

It comes after ONS swab data showed that Omicron variants BA.4 and BA.5 are the driving force behind the surge in coronavirus cases in England

After data from the Office for National Statistics (ONS) showed an increase in cases, a leading scientist has warned the United Kingdom to brace itself against a new wave of COVID-19.

''We will have a new wave of infections this month,'' Professor Christina Pagel, from University College London, told a briefing of the Independent Scientific Advisory Group for Emergencies.

''Now hopefully it won't be as high as the previous two waves and might be lower. But we can't count on that and either way, we are going to see more people becoming infected.''

“It's not a surprise that we have a new wave can see in the data. What's happened is that people don't want to look, and we're kind of closing our eyes to it. This is now our third wave in six months. So we had kind of six months of Delta we're now every two months of Omicron. The Omicron children are better than Omicron successively, that didn't happen with Delta,” she added.

It comes after ONS swab data showed that Omicron variants BA.4 and BA.5 are the driving force behind the surge in coronavirus cases in England.

“Across all four UK countries, the percentage of people testing positive for Covid-19 compatible with Omicron variants BA.1, BA.4, and BA.5 increased in the week ending June 2 2022,” the ONS said.

After analysis found both were likely to have a “growth advantage” over BA.2, the UK Health Security Agency had recently classified BA.4 and BA.5 as “variants of concern.”