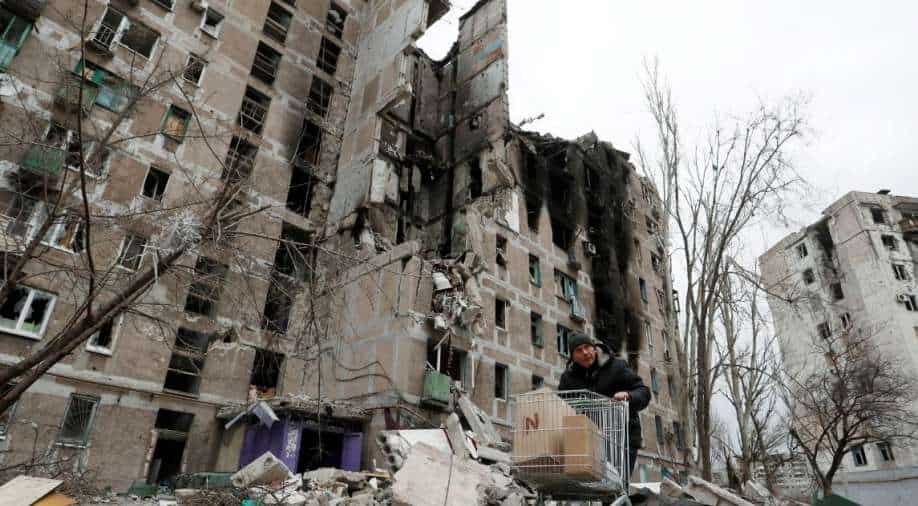 A local resident pushes a cart with humanitarian aid past an apartment building damaged during Ukraine-Russia conflict in the southern port city of Mariupol, Ukraine April 4, 2022. Photograph:( Reuters )

As quoted by news agencies, Latvia's ministry said in a statement: "The decision was taken in solidarity with Ukraine in its fight against the unprovoked and unjustified military aggression and war started by Russia"

Taking a strict stance against Russia's invasion of Ukraine, Latvia has ordered the closure of two Russian consulates in the country and told staff to leave the country.

A report by Sputnik mentioned that Latvia will also expel 13 Russian diplomats because of the "unprovoked and unjustified" military operations by Russia in Ukrainian cities.

The so-called "special military operation" ordered by Russian President Vladimir Putin on February 24 has left the country reeling as several towns and cities have been completely destroyed by shelling and bombing by Russian troops.

ALSO READ | Zelensky says Ukraine had 'no option but to negotiate' with Russia to end war. But will Putin hold talks?

As per data provided by the Ukrainian authorities, hundreds have been killed, thousands are injured and millions have been displaced in Ukraine.

Russia is also facing wrath as Western countries have slapped multiple economic sanctions to cripple and isolate the nation.

The country has also been accused of committing war crimes in Ukraine after mass graves and evidence of rape and torture were claimed to be found in the town of Bucha, which is west of the Ukrainian capital, Kyiv.

Fresh calls have been made to issue more sanctions against Russia after reports of Bucha atrocities emerged.

As quoted by news agencies, Latvia's ministry said in a statement: "The decision was taken in solidarity with Ukraine in its fight against the unprovoked and unjustified military aggression and war started by Russia."

Quoting the ministry statement, news agencies also mentioned that in Latvia, the consulates in the towns of Daugavpils and Liepaja will have to close and the staff members will have to leave by the end of April.

As reported by Sputnik, Estonia is expelling 14 Russian diplomats, closing the consulate in Narva and the office of the embassy in Tartu. Meanwhile, Spain expelled 'around' 25 Russian diplomats.

In response, Kremlin has said that Europe's expulsion of diplomats is a "short-sighted move".