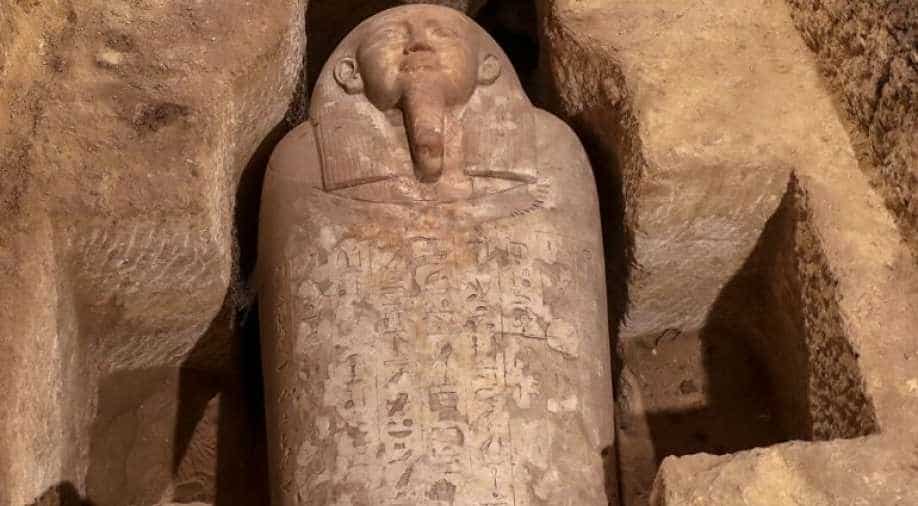 A sarcophagus unveiled during a archeological discovery in Egypt.  Photograph:( AFP )

The mummies were unveiled in Minya, an ancient southern city that was once the country's capital during the rule of Pharaoh Akhenaten and home to ancient archaeological sites.

A new archaeological discovery dating back to 3,000 years was unveiled in the southern governorate of Minya in Egypt on Thursday.

It included 16 communal tombs dating back to around 2600 BC which belonged to the sky God Horus, high priests of god Djehuty and along with senior officials of the late period in Upper Egypt.

Nearly 20 sarcophagi were unearthed at the tombs located in al-Ghoreifa archaeological site and dating back almost 2,500 years, the country's Ministry of Antiquities said.

Out of these, nine sarcophagi found in shafts were intact. In addition, 10,000 ushabti figurines, 700 amulets, pottery vessels, and 86 canopic jars along hundreds of jars made of gold were also discovered.

Skulls and human remains were found in a burial chamber.

Minya is about 300 kilometres south of Egypt's capital Cairo.

It is an ancient southern city that was once the country's capital during the rule of Pharaoh Akhenaten and home to ancient archaeological sites.