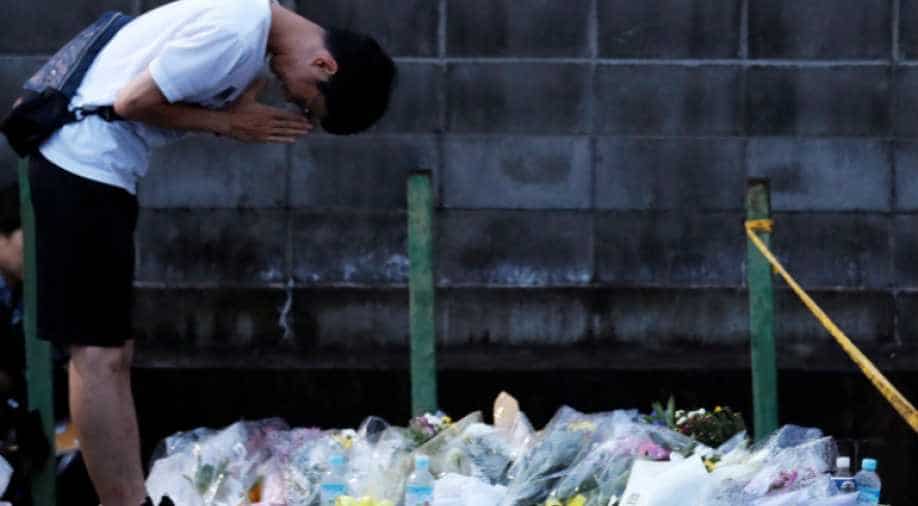 A man prays outside the Kyoto Animation building which was torched by arson attack, in Kyoto. Photograph:( Reuters )

The report further said that that the the suspect, identified as 41-year-old Shinji Aoba by the the Japan Police, was indicted in 2012 for committing a robbery at a convenience store. He also served a prison sentence of three-and-a-half years, said the Russian news agency.

The suspect has a history of being treated for mental health issues and lives on welfare, the news outlet said. He is currently receiving treatment for the burns caused by the fire and will be questioned by the police.

Thirty three people were killed in the fire on Thursday at the Kyoto Animation studio. Experts say the fire spread so fast not only because it was fuelled by petrol but because it was funnelled up a spiral staircase and there were no sprinklers to douse it.

Shouting "die" and screaming accusations of plagiarism sloshed what appeared to be petrol in the three-storey Kyoto Animation building on Thursday before setting it ablaze.

That alone could have been enough to make it impossible for victims to escape, architects said.

But an open, three-storey spiral staircase inside the building created an especially deadly environment for fire.

"The structure of the building was that it had one spiral staircase penetrating through three floors acting as a chimney, the most effective way of starting a fire," said Momoko Higuchi, a Tokyo-based architect.

"Because the fire was with petrol, the effect was like a bomb. Most died of smoke."

An inspection of the building in October had found no fire safety problems, he said.