Kamala Harris' husband appears as '@SecondGentleman' on Twitter before Inauguration 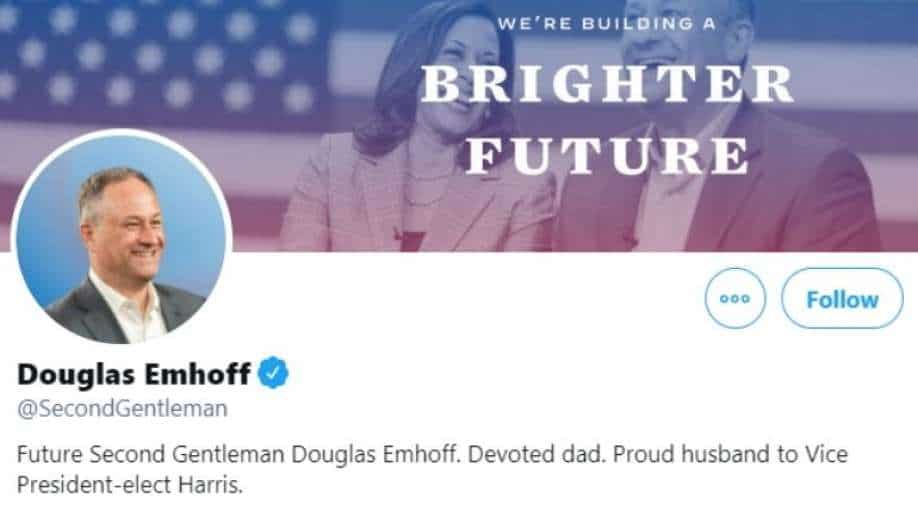 In a first, a few days after Twitter launched a new Twitter account '@PresElectBiden' for the incoming US President Joe Biden, the social media platform has done the same for the Vice-President's husband.

Kamala Harris' husband Douglas Emhoff will be the first Second Gentleman in the history of the US. Harris recently made history by becoming the first woman Vice President and first South Asian, African-American VP of the US.

Now, her husband, too, has made history by becoming the first-ever 'Second Gentleman' of the country. This is also the first time Twitter has launched an official account for the partner of the VP.

The incoming President also gave a warm welcome to Emhoff — along with the VP and FLOTUS — through his first tweet on his new official account.

Folks — This will be the account for my official duties as President. At 12:01 PM on January 20th, it will become @POTUS. Until then, I'll be using @JoeBiden. And while you're here, follow @FLOTUSBiden @SenKamalaHarris @SecondGentleman and @Transition46.

Biden will be sworn in as the new US President in an inauguration ceremony on January 20 and the outgoing President Donald Trump will be surrendering the control of the White House on the same day.

The 56-year-old has left his private law practice to focus on his role at the White House, and had described it as an 'honour' to be able to serve as the Second Gentleman of the US.