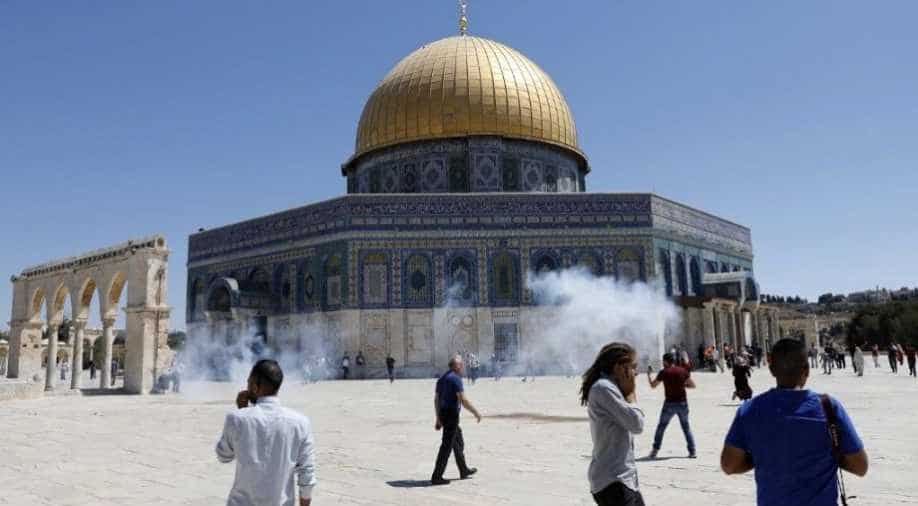 Palestinians run for cover from sound grenades fired by Israeli security forces outside the Dome of the Rock mosque in Jerusalem's Al-Aqsa Mosque compound. Photograph:( AFP )

Jordan, the only Arab country apart from Egypt to have a peace agreement with the Jewish state, supervises Islamic holy sites in Jerusalem.

It summoned envoy Amir Weissbrod to voice its "condemnation and rejection of Israeli violations" at the highly sensitive site, where Israeli security forces clashed with Palestinian worshippers last week.

Jordan, the only Arab country apart from Egypt to have a peace agreement with the Jewish state, supervises Islamic holy sites in Jerusalem.

Its diplomatic protest came days after Israeli Public Security Minister Gilad Erdan reportedly told a radio station that the country should work toward Jews being allowed to pray at the holy site.

But he added the change should come through "political agreements and not by force," according to Israeli newspaper Haaretz.

Jews are allowed to visit but cannot pray there -- a ban condemned by some nationalists including members of Prime Minister Benjamin Netanyahu's right-wing coalition.

Jordan's foreign ministry expressed "the kingdom's strong condemnation" over Erdan's comments, demanding "an immediate stop to Israel's violations and all its attempts to change the historic and legal status quo" at the site.

The Al-Aqsa mosque is the third holiest place in Islam and a key Palestinian national symbol.

It is also the holiest spot in the world for Jews, who refer to it as the Temple Mount and believe it was the site of the two biblical-era Jewish temples.

Israeli police and Palestinian worshippers clashed at the compound on August 11 as Muslims around the world marked the Eid al-Adha holiday.

That festival coincided with the Jewish Tisha B'av holiday, resulting in an increase in visits by Jewish religious nationalists to the holy site.

In a bid to ease tensions, police initially barred Jews from entering, but Muslim worshippers still suspected they would be allowed in and staged protests that sparked clashes.

Muslim worshippers' access to Al-Aqsa and the adjoining Dome of the Rock is controlled by Israeli security forces.

The site is located in east Jerusalem, occupied by Israel in the 1967 Six-Day War and later annexed in a move never recognised by the international community.