Joe Biden stumbles on the steps of Air Force One 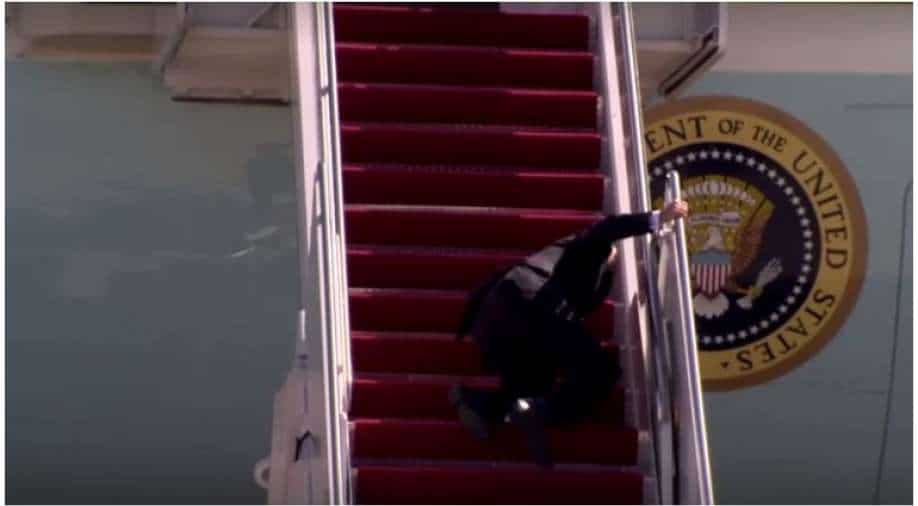 US President Joe Biden on the steps on Air Force One Photograph:( Reuters )

Biden recently recovered from a fractured foot, an injury he sustained while playing with his dog, Major

US President Joe Biden stumbled on the steps of Air Force one while boarding the presidential aircraft on Thursday. He was on Joint base Andrews and was on his way to Georgia. In Georgia, he was due to meet members of Asian-American community after a deadly shooting rampage in the state.

Biden tripped on the steps, bounced back and fell again before walking up the last steps, turning to salute and boarding the plane.

Biden recently recovered from a fractured foot, an injury he sustained while playing with his dog, Major.

In Georgia, Biden and Vice President Kamala Harris will meet community leaders and state lawmakers from the Asian-American and Pacific Islander community to hear concerns about the killings and discuss a rise in anti-Asian hate crimes, White House spokeswoman Jen Psaki said on Thursday.

A 21-year-old man has been charged with murdering eight people, including six women of Asian descent, at three spas in and around Atlanta on Tuesday, rattling Asian Americans already grappling with a rise in hate crimes directed at them since the COVID-19 pandemic began.

Speaking to reporters as he left the White House South Lawn, Biden, who said earlier this week he thought Vladimir Putin was a killer, said he will talk with the Russian leader "at some point."

On Thursday, Putin said he and Biden should hold live online talks in coming days.