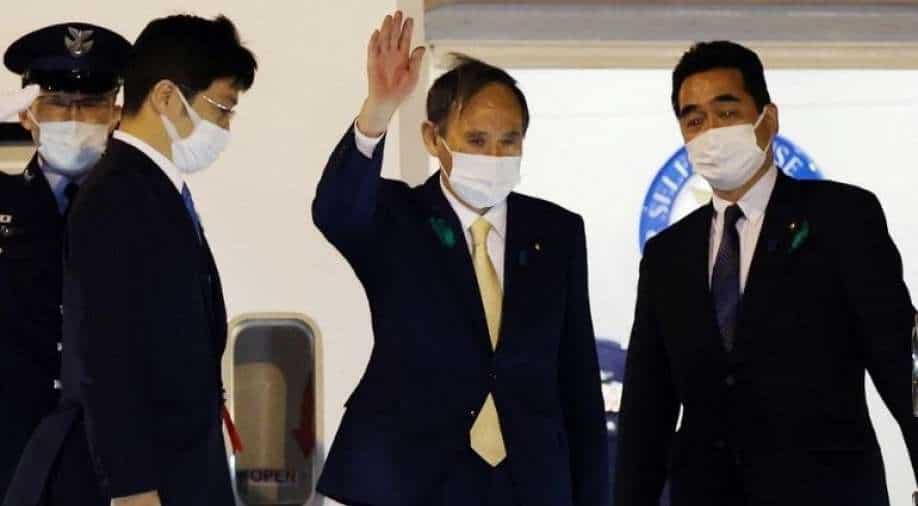 Japan's Prime Minister Yoshihide Suga (2nd-R) waves as he departs for the US from Tokyo's Haneda airport on April 15, 2021 to become the first foreign leader to hold talks with US president Photograph:( AFP )

Suga and Biden are expected to present a united front on Taiwan, China's most sensitive territorial issue, at Friday's summit

Japanese Prime Minister Yoshihide Suga arrived in the United States on Thursday for a summit meeting with US President Joe Biden.

The meeting will be Biden's first in-person summit with a foreign leader since taking office in January.

Suga and Biden are expected to present a united front on Taiwan, China's most sensitive territorial issue, at Friday's summit, according to a senior US administration official.

Biden and Suga are expected to agree on a joint statement on the Chinese claimed but democratically ruled island, said the official, who spoke on the condition of anonymity.

The last time US and Japanese leaders referred to Taiwan in a joint statement was in 1969, when Japan's prime minister said maintenance of peace and security in the "Taiwan area" was important for its own security. That was before Tokyo normalized ties with Beijing.

The move now aims to ratchet up pressure on China. However, such a statement appears likely to fall short of what the United States has been hoping to see from Suga, who inherited a China policy that sought to balance security concerns with deep economic ties when he took over as premier last September.

Biden and Suga will also discuss Beijing's treatment of Muslims in the Xinjiang region and its influence over Hong Kong, while also announcing a $2 billion Japanese investment in 5G telecommunications to counter China's Huawei Technologies.

Suga in September succeeded his ally Shinzo Abe, Japan's longest-serving prime minister, who was one of the few democratic allies to manage to preserve stable relations with Biden's volatile predecessor Donald Trump.

Biden's inaugural summit, held an unusually late three months into his term due to the Covid-19 pandemic, is expected to be a tame affair after the Trump era, with the president welcoming the soft-spoken Japanese leader for one-on-one talks and an expanded meeting with the cabinet before a joint news conference.

But Suga, who Japanese media reported arrived in Washington Thursday evening, is expected to balk at becoming an overenthusiastic cheerleader for the US line on China, which remains the vital top trading partner for resource-scarce Japan.

Tokyo since Abe's time has worked to stabilize relations with Beijing and not joined Washington in sanctions over rights concerns in Hong Kong and Xinjiang.

"The Biden administration, I think, is concerned at how aggressive China has been and how much ground the US has lost in recent years in Asia and wants to catch up quickly," said Michael Green, who was the top Asia adviser to former president George W. Bush and is now senior vice president at the Center for Strategic and International Studies.

Japan will welcome what is expected to be a fresh declaration that the Japanese-administered Senkaku islands -- where Beijing, which calls them the Diaoyu, has been increasingly assertive -- fall under the US-Japan security treaty that requires mutual defense.

Suga, and Moon next month, will also consult Biden as he reviews US policy on North Korea, where Trump's unusual personal diplomacy with leader Kim Jong Un eased tensions but did not bring a lasting accord on Pyongyang's nuclear program.

US says 'possible' to revive Iran nuclear deal before vote