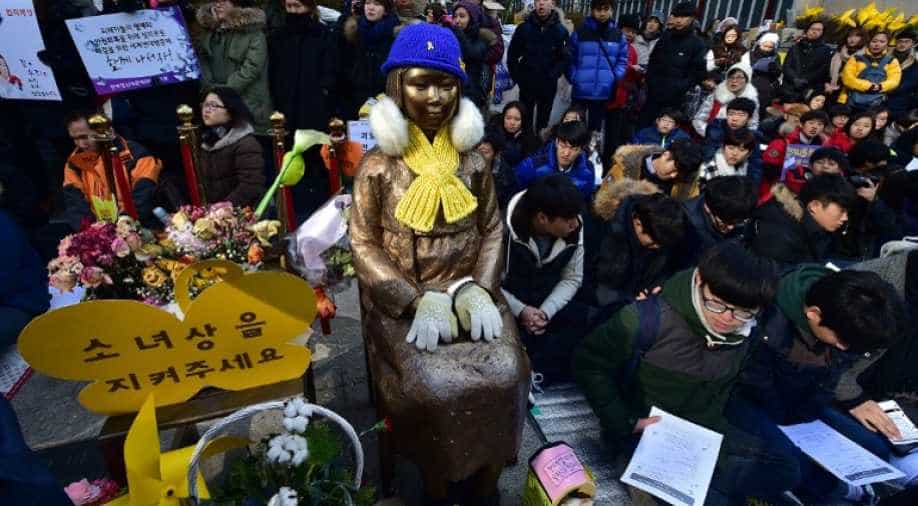 Mainstream historians say up to 200,000 women, mostly from Korea but also other parts of Asia including China, were forced to work in Japanese military brothels during World War II. Photograph:( AFP )

Japan recalled its ambassador to South Korea on Friday to protest the placing of a statue symbolising victims of Japanese wartime sex slavery outside its consulate in the city of Busan last month.

In a move likely to reignite a feud over the so-called "comfort women", Japan's chief government spokesman Yoshihide Suga also announced that Japan is ordering home its consul-general in Busan and suspending discussions over a Japan-South Korea currency swap.

"Japan and South Korea are neighbours," Suga said. "It's a very important country. It's extremely regrettable we had to take this action."

"The Japanese government will continue to strongly urge the South Korean government as well as municipalities concerned to quickly remove the statue of the girl," he added.

Mainstream historians say up to 200,000 women, mostly from Korea but also other parts of Asia including China, were forced to work in Japanese military brothels during World War II.

The plight of the women is a hugely emotional issue that has marred relations between the two Asian neighbours for decades and which, for many South Koreans, symbolises the abuses of Japan's 1910-45 colonial rule over the Korean peninsula.

The statue is a copy of one that sits across the road from the Japanese embassy in Seoul and that for more than five years has been a rallying point for supporters of the few surviving South Korean former sex slaves.

The statue in Busan was initially removed by local authorities after South Korean activists placed it in front of the Japanese consulate in the southern port city last week. But they did not stop it being put back after Japan's hawkish defence minister Tomomi Inada offered prayers at a controversial war shrine in Tokyo the next day.

Suga, however, made no mention of Inada's visit to the shrine, which honours millions of mostly Japanese war dead -- but also senior military and political figures convicted of war crimes. Her visit drew harsh criticism in South Korea as well as China.

"Even if there exist difficult issues, the government emphasises again that it will continue developing South Korea-Japan relations based on trust between the two governments," he said.

Jiji Press said they spoke for about an hour and that Yun expressed "regret" over Japan's actions.

Activists had first placed the new statue outside the consulate to mark their opposition to a South Korea-Japan agreement reached a year ago to finally resolve the "comfort women" issue.

Under that accord, which both countries described as "final and irreversible," Japan offered an apology and a one-billion yen ($8.6 million) payment to surviving Korean comfort women.

But critics said the deal did not go far enough in holding Japan responsible for wartime abuses.

The statue in Seoul — a bronze of a young woman seated with a small bird on her shoulder — has proved a popular symbol.

Japan says it should have been removed after the comfort-women accord was signed, but Seoul argued it had only agreed to look into the possibility of moving it.