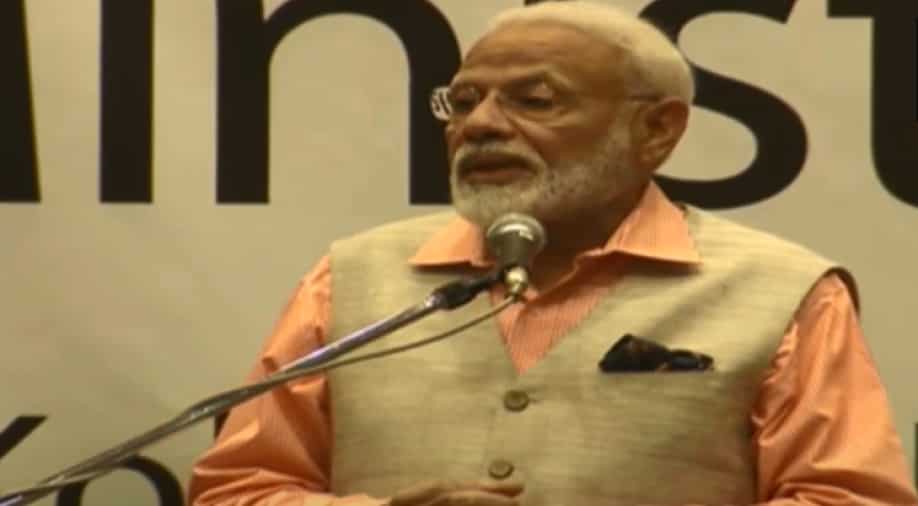 The Indian prime minister expressed his happiness over coming to Japan after seven months.

PM Modi today addressed the Indian diaspora in Kobe, Japan ahead of the G20 summit in Osaka.

"I'm fortunate to be here once again after seven months. It's a coincidence that last time I was here, election results were held here and you had shown trust in my dear friend Shinzo Abe. Today when I'm here and the largest democracy has shown even greater trust in this 'Pradhan Sevak'."

"I stand before you as PM with a greater mandate, India has reposed its faith in me," he said.

"It is a victory of truth and democracy," PM Modi said, adding, "dedication to democratic values led to victory."

"The nation gave pro-incumbency mandate after 1971," he told the Indian diaspora. "This is big. After three decades, for the first time, a government with a clear majority formed a government for the second time in a row."

"Sabka saath, sabka vikas is our mantra," the PM said. "Indian democracy inspires others in the world."

PM Modi told the crowd that he would work towards ensuring global trust on India.

"Besides Delhi and Ahmedabad, I had the opportunity to take PM Abe to Varanasi. He visited my parliamentary constituency and participated in the Ganga aarti there. Whenever he got the opportunity, he spoke of this divine experience."

"After I became PM in 2014, I got an opportunity to strengthen India-Japan friendship, together with my friend PM Shinzo Abe. We took our diplomatic relations beyond the purview of capitals and ambassadors and took them directly among the public," he said.

"We managed Cyclone Fani with minimum damage and the world praised that government machinery, human resource and space technology can be used to perform well," he said.

"Also, we'll launch Chandrayaan-2 in a few months and by 2022 we're planning to launch India's maiden human spaceflight program-Gaganyaan," he informed the Indian community gathered at the Hyogo Prefecture guest house in Kobe.