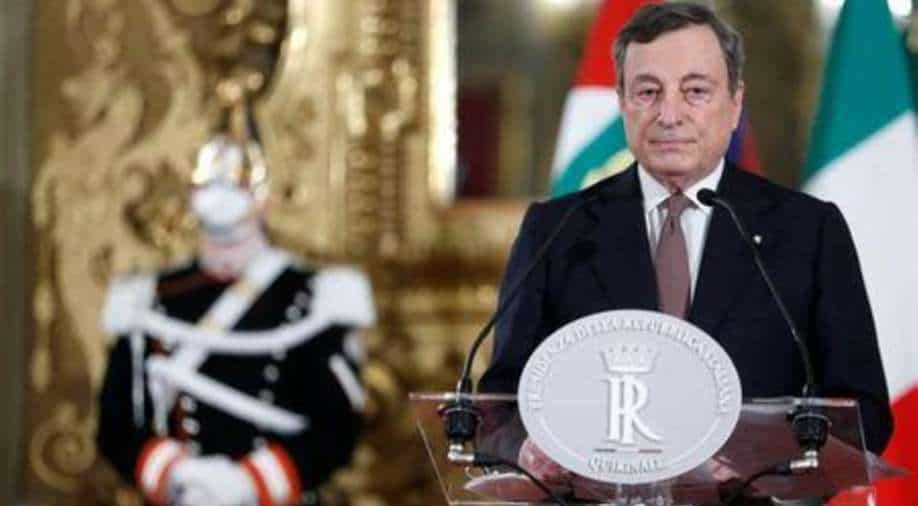 Draghi was sworn in on Saturday as Italy's 30th prime minister

Italian Prime Minister Mario Draghi said on Wednesday that he will use "all means" to fight coronavirus pandmic and that it presented Italy with an opportunity to rebuild as it did after Second World War. This was his first speech since taking office. Mario Draghi, the former chief of European Central Bank said that the pandemic was his top priority in a long list of issues requiring urgent attention.

"The government will carry out reforms but will also tackle the emergency," he told the Senate, the upper house of parliament, where he has almost unanimous support for his new government of national unity.

The 73-year-old, parachuted in after the previous centre-left government collapsed, has been dubbed "Super Mario" since promising to do "whatever it takes" to save the euro during the 2012 debt crisis.

On Wednesday he promised to fight "with all means" the pandemic that has left more than 94,000 Italians dead and sparked a deep recession, with the economy contracting almost nine percent last year.

"Today we have, as did the governments of the immediate post-war period, the possibility -- or rather the responsibility -- to start a new reconstruction," Draghi said in his almost hour-long address.

On Wednesday, Draghi said it was a time of "intense emotion" personally to take over with Italy in such a "dramatic situation".

There is an increased concern about the new coronavirus variant in Italy. This has sparked a series of mini-lockdowns in towns across Italy, Draghi emphasised the importance of speeding up vaccinations.

Another immediate challenge is drawing up a plan to spend what Draghi has previously called the "extraordinary resources" offered by the EU.
Italy expects to receive more than 200 billion euros ($240 billion) from the EU's post-coronavirus recovery fund, but in return, it is expected to commit to potentially difficult or unpopular reforms.

"These resources will have to be spent with an aim to improve the growth potential of our economy," Draghi said.

He promised reform to Italy's stifling bureaucracy, labyrinthine tax code and snail-paced justice system, as well as a focus on education, closing the gap on female employment and fighting climate change.

In a second speech on Wednesday evening, he also pleaded for a revival of a failed policy: forcing EU countries to each take a share of the migrants arriving from across the Mediterranean, after years of Italy shouldering much of the burden.

"As a concrete measure of solidarity, Italy -- supported equally by certain Mediterranean countries -- proposes a mechanism of obligatory redistribution of migrants," he said.

Draghi has assembled a cabinet comprising a mix of politicians and technocrats, with key portfolios linked to the EU reform agenda given to technocrats.

Late Wednesday, the Senate passed a vote of confidence -- 262 in favour, 40 against and two absentations -- in  Draghi's government. There will be another vote in the lower Chamber of Deputies on Thursday.