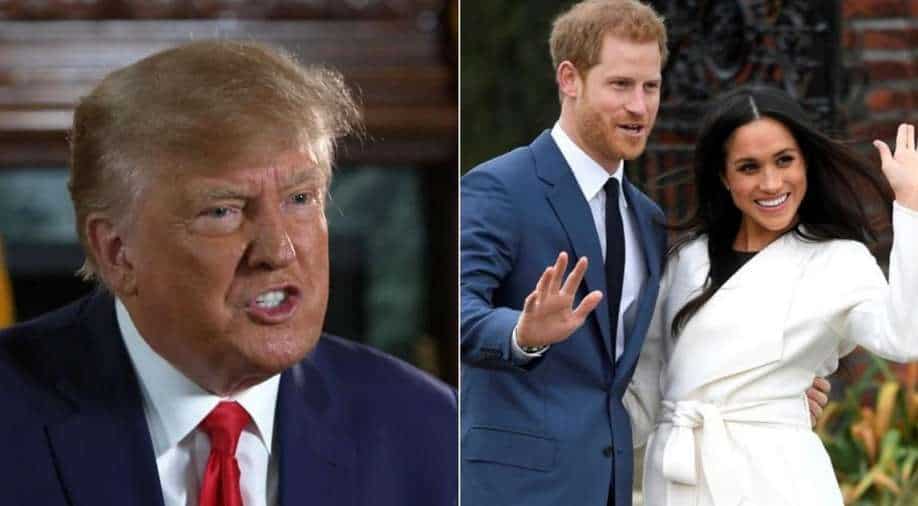 Trump said that Harry is "whipped like no person I think I've ever seen" and "led around by his nose". Photograph:( Reuters )

During the chat, Trump said that he thought Harry would get bored or Meghan would start liking "some other guy better"

Trump also blasted Harry for not attending Prince Philip's memorial service and labelled him an "embarrassment" and a "whipped man".

Trump said that Harry is "whipped like no person I think I've ever seen" and "led around by his nose".

The strange prophecy by Trump was made during a TalkTV interview with popular British television host Piers Morgan.

ALSO READ | 'I would say...': Here's how Donald Trump would deal with Vladimir Putin during Russia-Ukraine war

From the ongoing Russia-Ukraine war to the US Capitol attack on January 6, 2021, Trump talked about a range of topics.

During the chat, he said that he thought Harry would get bored or Meghan would start liking "some other guy better".

The former president also said that Harry and Meghan should be stripped of their Royal titles. He also added that he didn't like how Meghan "spoke badly of the Royal Family but in particular the Queen".

On being asked by Morgan whether he thinks Harry and Meghan's relationship will end, Trump said "I do". He also hailed himself as a "very good predictor".

He noted, "I predicted almost everything. It’ll end and it will end bad."

Trump further said, "And I wonder if Harry’s gonna go back on his hands and knees back into the beautiful city of London and say, please. You know, I think Harry has been led down a path."

"I'm not a fan of Meghan, and I wasn't from the beginning. Poor Harry is being led around by his nose and I think he's an embarrassment," he added.