'It was a forced apology': Netizens slam Boris Johnson for 'bring your own booze' party at Downing Street 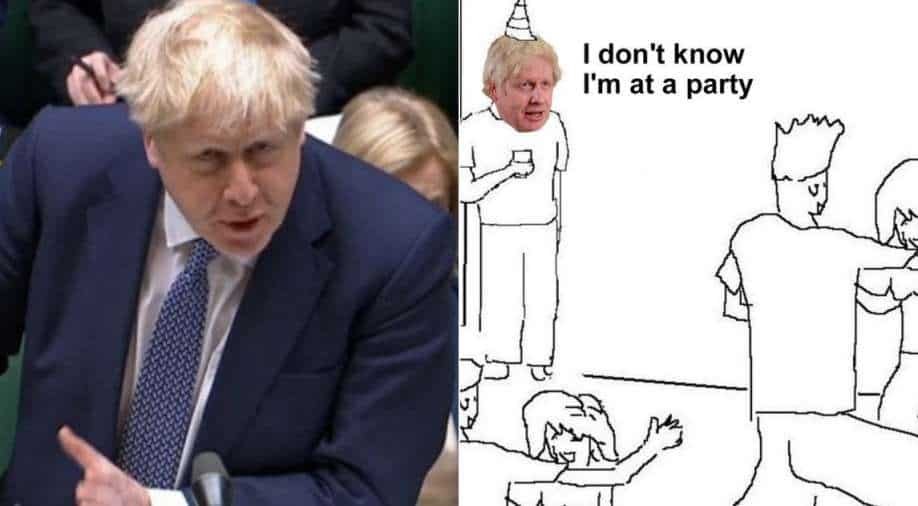 In his apology, Boris said that he did not appreciate how the event would look to millions of Britons who were respecting Covid rules during the lockdown

Amid growing calls of resignation, UK Prime Minister Boris Johnson apologised on Wednesday (January 12) for attending a party held in the Downing Street office during coronavirus (COVID-19) lockdown in May 2020.

From COVID-19 handling to expensive refurbishment of his apartment, Boris has been facing criticism over a range of issues and the reports of lockdown-breaching parties came as a massive blow.

Important to note that the latest update about the gathering at Downing Street is different from the wine and cheese garden party, which apparently took place last year, on May 15 and a photo of the same went viral.

Boris has been facing criticism from not only the opposition leaders, as some senior Tories have also called for him to resign and the latest piece of news has angered common people over the gathering when such festivities were banned in the country.

ALSO READ | Rishi Sunak would be a better prime minister for UK than Boris Johnson: Poll

The news was brought to notice by Dominic Cummings, who is a former aide of PM Johnson. In his blog post, he wrote that the investigation should be done on the "Socially Distanced Drinks" email sent on May 20, 2020.

Keir Starmer, leader of the main opposition Labour party, said the public believed Johnson was "lying through his teeth". "The only question is will the British public kick him out, will his party kick him out, or will he do the decent thing and resign? The prime minister's a man without shame," Starmer added.

Senior Conservative MP Roger Gale said it was now clear that Johnson had misled parliament and was, politically, a "dead man walking". "Unfortunately what the prime minister has said today leaves people like me in an impossible situation," he told the BBC, warning that Tory backbenchers could now hold a no-confidence vote.

Nigel Mills, another Conservative lawmaker, said: "If the prime minister knowingly attended a party I don't see how he can survive, having accepted resignations for far less."

In his apology, Boris said that he did not appreciate how the event would look to millions of Britons who were respecting Covid rules, even missing out on farewells to dying relatives.

"And to them and to this House I offer my heartfelt apologies," Johnson said in the UK's House of Commons. "With hindsight I should have sent everyone back inside. I should have found some other way to thank them (his staff)," he added, admitting he had been present for about 25 minutes.

After the apology, netizens have flooded the social media platforms with memes to criticise Boris Johnson. Take a look at some of the reactions starting with Irish airline Ryanair's post in which UK PM's face has been used in an edited party-related meme with the caption: "Boris Johnson for 25 minutes on 20 May 2020".

Boris Johnson for 25 minutes on 20 May 2020 pic.twitter.com/pFqIz6dIqr

I'm 86, I've seen 17 Prime Ministers, some good, some bad - but Boris Johnson is the first who through a mixture of arrogance incompetence and dishonesty has actually managed to make the people less healthy and less wealthy, whilst simultaneously undermining democracy.
Go. Now. pic.twitter.com/kaRVoUz7z7

Very striking that @BorisJohnson speaks again and again of “mistakes made” & “mistakes we made” but he can’t bring himself to add the word “I”. Begs the question - is he apologising for his behaviour, that of his staff or just how things look?

It’s not the crime that gets you, it’s the cover-up!#PrinceAndrew #BorisJohnson pic.twitter.com/5tiZrbL9I3

No lockdown rules were broken in this meme. 🤣@BorisJohnson - What I would have given for a party with my mates (or even work colleagues) in May 2020! #uk #covid #government #shambles pic.twitter.com/2ZIVQtxHaY

Excuse me whilst I just post #borisjohnson memes all night pic.twitter.com/7kNEVjalog

go on then @BorisJohnson pic.twitter.com/49FTFuGMMO

I saw this posted on LinkedIn. Sadly I don't know who created it, but I thought @BorisJohnson might find it useful. pic.twitter.com/Iftbs45npa

boris johnson on 20th of may 2020: pic.twitter.com/tXXn6QlFmz

“Unlike Boris Johnson I can tell you that I wasn’t at the Downing Street drinks party during lockdown because, unlike Boris Johnson, I don’t think the rules are just for other people.” pic.twitter.com/SQtJx4e25b