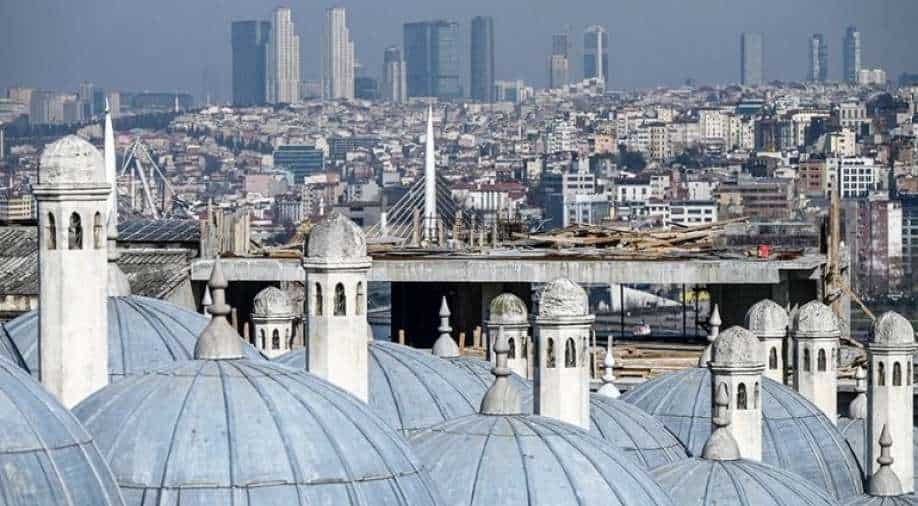 This picture shows the Suleymaniye Mosque’s domes and a building under construction (back) stopped by the Istanbul metropolitan municipality (IBB). Photograph:( AFP )

Turkish conglomerates are racing to add high-end apartment blocks and office towers to Istanbul’s rapidly-changing skyline, turning to one of the world’s most profitable real estate markets for quick returns as other parts of the economy suffer.

But now a rickety wooden scaffolding is blighting the iconic Suleymaniye Mosque. This has sparked fury on social media.

"The disrespect, there is no recognition of any proportion or any limit," said Esin Koymen, head of the Istanbul Chamber of Architects.

"There's this talk that the new buildings betray Istanbul's silhouette but it's quite upsetting to see the continuing recklessness on a landmark historical compound," she said.

President Tayyip Erdogan has ambitious plans for Istanbul, which include digging a 45-km (30 mile) channel linking the Black Sea to the Sea of Marmara to ease congestion in the Bosphorus Strait and filling in part of the sea to create an assembly ground big enough for 800,000 people.

He hopes, too, to bequeath Turkey a new constitution, replacing the version written after a 1980 military coup and in the process creating a powerful executive presidency.

The Foundation for the Expansion of Knowledge, owner of the building and whose board of trustees' chairman is Erdogan's son Bilal, insisted the construction of a student dormitory was "not illegal".

However, the foundation was forced to take a step back after the rising block drew rebuke even from conservative quarters.

"We will not be involved in any action that goes against Suleymaniye's soul," the foundation's acting chairman Nurettin Alan told journalists in the mosque's courtyard last week.

"Suleymaniye is our soul, we'll protect it."

Moreover, Alan accused the Istanbul municipality of "politicising" the issue by locking up the building despite their decision to stop construction, which had reached nearly 16 metres.

"Compare the pictures from 2016 and 2022. Anyone who looks to the Bosphorus through the poetic domes of Suleymaniye knows (that building) was not there," Polat said.