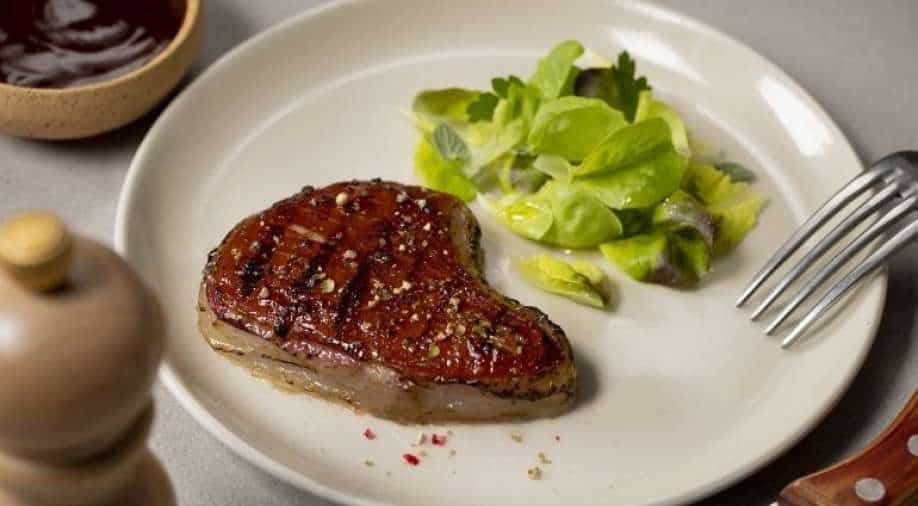 While the Israeli company is trying to bring this process at a point where the price for conventional and cultured meat is the same, experts have said that the steaks might not be out for public soon

Israel has unveiled world’s largest lab-grown steak that weighs nearly 4oz (110 grams) and is made up of real muscle and fat cells.

Lab grown by Israeli company MeaTech 3D, this steak is composed of real muscle and fat cells which have been derived from tissue samples of a cow. To complete the process, bovine stem cells were added in the 'bio-links' which were then put into a 3D printer to make the final steak. From there, the steak was left to mature in an incubator to mature where the printed stem cells were differentiated into fat and muscle cells that develop into fat and muscle tissue, respectively, to form the steak

"The breakthrough is the culmination of over one year’s efforts in our cellular biology and high-throughput tissue-engineering processes, as well as our precision bioprinting technology. We believe we have placed ourselves at the forefront of the race to develop high-end, cell-based meat products," Sharon Fima, CEO at MeaTech, said.

While the Israeli company is trying to bring this process at a point where the price for conventional and cultured meat is the same, experts have said that the steaks might not be out for public soon. The company is planning to first sell cultured fat as an ingredient to be included in other products. A pilot plant is in works for next year.

"MeaTech intends to continue improving upon its bioprinting and cultivation technologies to produce cultivated meat that better mirrors the key characteristics of farm-raised, premium steak," the company says in a press release.

The company is aiming to develop a perfect replacement of the conventional steak that can maximise 'cell-based content rather than non-meat ingredients'.

"The MeaTech announcement marks an exciting step forward in terms of the complexity and sheer size of a cultivated steak," Seren Kell at the Good Food Institute (GFI) Europe was quoted by the Guardian. "3D printing enables companies to create more sophisticated 'whole cut' products which can authentically recreate the taste, texture and mouthfeel of conventional meat."