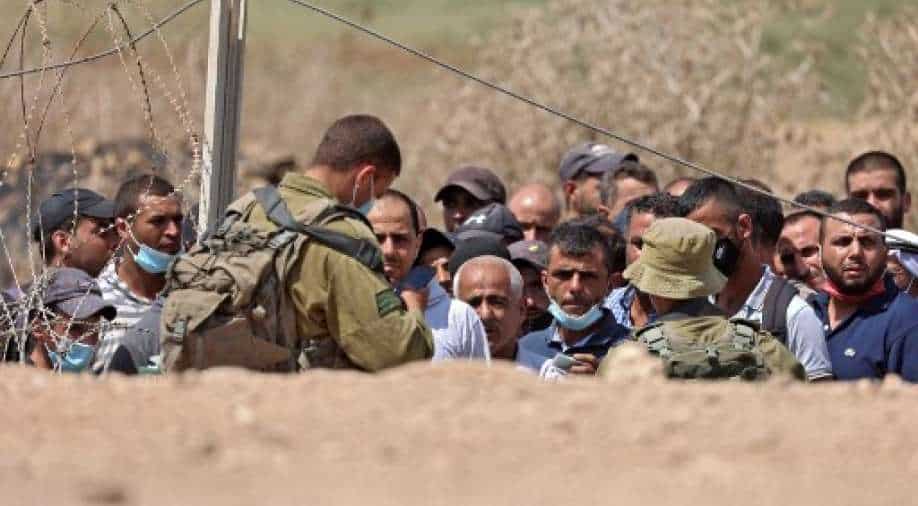 Israeli soldiers search Palestinian labourers who work in Israel before allowing them to cross in West Bank Photograph:( AFP )

Those new homes add to the more than 2,000 residences which defence sources have said in August would be authorised for West Bank settlers

The announcement from the housing and construction ministry in right-wing Prime Minister Naftali Bennett's government said tenders had been published for 1,355 homes in the West Bank, which has been occupied by Israel since the 1967 Six-Day War.

Those new homes add to the more than 2,000 residences which defence sources have said in August would be authorised for West Bank settlers.

Final approval is expected from the defence ministry this week for those homes.

Palestinian prime minister Mohammed Shtayyeh, speaking at a weekly cabinet meeting, called on world nations, and especially the United States, to "confront" Israel over the "aggression" that settlement construction poses for the Palestinian people.

The Palestinian Authority will be keenly watching for a response from US President Joe Biden's administration, which has said it opposes unilateral Israeli settlement construction as an obstacle to the two-state solution to the conflict.

About 475,000 Israeli Jews live in settlements in the West Bank, which are considered illegal under international law, on land Palestinians claim as part of their future state.

Jordan, a key Israeli security partner with whom Bennett has sought to improve ties since taking office in June, condemned the announcement as "a violation of international law."

He has ruled out formal peace talks with the Palestinian Authority during his tenure, saying he prefers to focus on economic improvements.

The tenders come after Israel last week gave approval for 4,000 Palestinians to register as residents of the West Bank, the first such move in the Israeli-occupied territory in 12 years.

The new Jewish homes are to be built in seven settlements, according to the statement from the Housing and Construction Ministry.

Israeli settlement expansion in the West Bank and annexed east Jerusalem has continued under every Israeli government since 1967.

However, construction accelerated in the last few years under Netanyahu, with a significant boom during former president Donald Trump's US administration, accused of egregious pro-Israel bias by Palestinians.