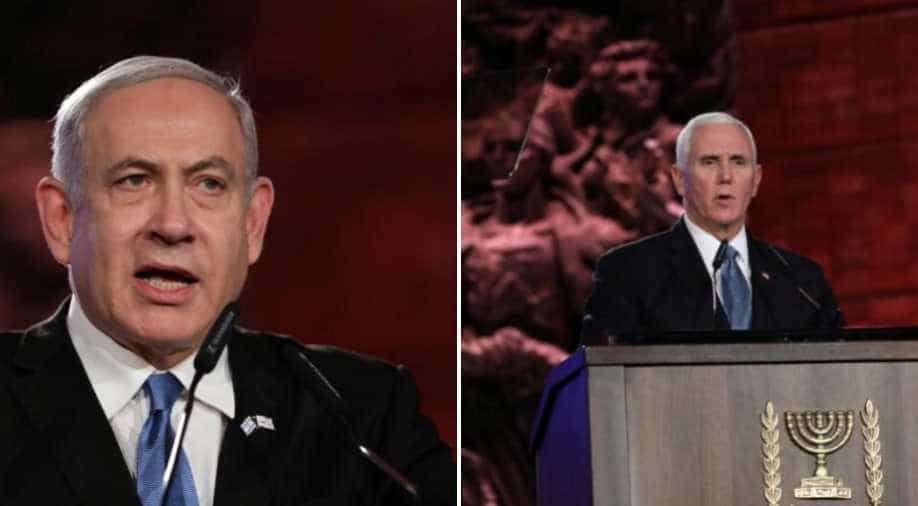 Israel and the United States on Thursday called for action against Iran in front of world leaders marking 75 years since the liberation of Auschwitz, comparing the Iranian threat to that once posed by Nazi Germany.

"There will not be another Holocaust," Israeli Prime Minister Benjamin Netanyahu told the Jerusalem gathering of more than 40 heads of state and government, pointing to what he called "the tyrants of Tehran".

He lamented that "we have yet to see a unified and resolute stance against the most anti-Semitic regime on the planet, a regime that openly seeks to develop nuclear weapons and annihilate the one and only Jewish state."

In a similar vein, US Vice President Mike Pence urged the international community to "stand strong" against Iran, calling it the only country where Holocaust denial is "state policy".

French President Emmanuel Macron, however, rejected such parallels, telling the gathering -- without mentioning Iran, Israel or the US by name - that "no one has the right to invoke (those killed by the Nazis) to justify division or contemporary hatred".

Russian President Vladimir Putin proposed a summit of leaders of the five permanent members of the UN Security Council to "defend peace" in the face of global instability.

Tehran denies it is trying to build a nuclear bomb and accusations of anti-Semitism, insisting that while it opposes the Jewish state and supports the Palestinian cause, it has no problem with Jewish people, including its own Jewish minority.

The leaders of former Allied powers were at the Yad Vashem Holocaust memorial centre for the biggest international diplomatic gathering ever held in Israel, to remember the liberation of the World War II death camp where the Nazis killed more than 1.1 million people, most of them Jews.

While the main focus was on the Holocaust, its haunting legacy and the resurgence of anti-Semitism, modern geopolitics quickly overshadowed the event, held at a time of soaring US-Iranian tensions.

Netanyahu said the main lesson of the Holocaust was that "Israel will do whatever it must do to defend our state, defend our people, and defend the Jewish future".

He added: "I call on all governments to join the vital effort of confronting Iran."

Israel fiercely opposed a 2015 deal between Iran and world powers that offered Tehran sanctions relief in return for curbs to prevent it from acquiring nuclear weapons.

Netanyahu applauded when US President Donald Trump in 2018 pulled out of the accord and has pushed European powers to follow Washington's lead.

He said Thursday that Israel "salutes" Trump "for confronting the tyrants of Tehran that subjugate their own people and threaten the peace and security of the entire world".

Aside from Iran, a key theme of the event was the resurgence of anti-Semitism in Europe and North America, in the speeches at the memorial centre for the six million Jews that Nazi Germany killed in gas chambers, ghettos and forced labour camps.

"This is a historic gathering, not only for Israel and the Jewish people, but for all humanity," said Israeli President Reuven Rivlin, calling on the world to "stand united in the fight against racism, anti-Semitism and extremism".

Germany's President Frank-Walter Steinmeier warned that racist and anti-Semitic "spirits of evil are emerging in a new guise".

The German head of state told the gathering he bowed "in deepest sorrow" at the memory of "the industrial mass murder of six million Jews, the worst crime in the history of humanity ... committed by my countrymen".

"The spirits of evil are emerging in a new guise, presenting their anti-Semitic, racist, authoritarian thinking as an answer for the future, a new solution to the problems of our age," he said.

About 100 Holocaust survivors were at the event, to pray for the dead and light a memorial torch.

Among them was Yona Amit, 81, who as a child spent the war hiding from the Nazis but lost family members including her cousin.

"I exchanged shoes with him playing," shortly before he was captured, she recalled.

"They were straight away sent to Auschwitz. And of course my cousin, with my shoes: straight away up in the chimneys, in the gas chambers," she told AFP.

"My shoes are in that big mound of shoes in Auschwitz, my shoes are there. I am here."

The ceremonies move on next Monday to the site in Poland of the Auschwitz camp, which was liberated by the Soviet Red Army on January 27, 1945.