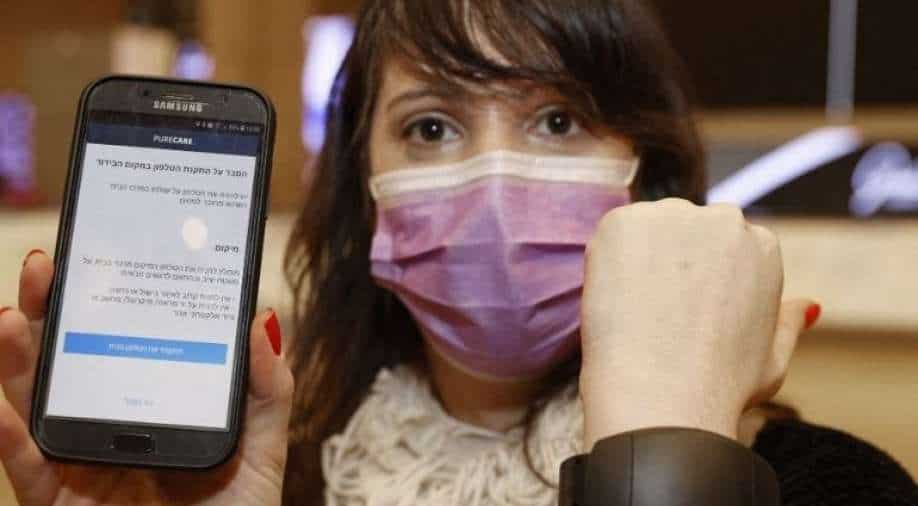 An Israeli woman arriving on a repatriation flight from Germany displays an electronic bracelet, which reportedly monitors the wearers’ location via bluetooth and GPS technology and connect to the users’ cell phone, at Ben-Gurion Airport near Tel Aviv Photograph:( AFP )

Israel is offering a tracking bracelet as an alternative to quarantine incoming travellers. It reportedly monitors the wearers’ location via Bluetooth and GPS technology and connects to the users’ cell phone.

The bracelet's monitor will notify authorities should they violate a mandatory isolation period.

The pilot programme began on Monday with 100 tracking systems available at Ben Gurion Airport, where traffic has dropped dramatically due to restrictions meant to reduce the risk of COVID-19 variants entering the country.

Incoming passengers have been forced to stay at hotels, paid for by the government, for up to two weeks to make sure they are virus-free before they can move around freely.

Should someone choose the new system -- which includes a slim, lightweight and waterproof bracelet, a smartphone and a wall-mounted tracker -- they can self-isolate at home.

The system alerts the authorities if someone removes the bracelet or ventures too far from the home monitor.

SuperCom SPCB.O, the company behind the technology, said there was a potential for thousands of the bracelets to be in use.

The court referred to the tracking measure as a grave infraction of citizens' civil liberties.

The surveillance technology, created by Shin Bet counter-terrorism agency has been used by Israeli authorities intermittently since March 2020. As part of this move, carriers were able to track mobile phones nearby to ascertain who they've come into contact with.

Ever since the tracking measure began, civil rights groups had raised privacy concerns and moved the courts. In addition, lawmakers expressed doubt over the effectiveness of the contact-tracing tool.

The court, in its ruling, claimed that it feared the mobile tracking measure was slowly becoming permanent, as opposed to its introduction as a temporary emergency measure.