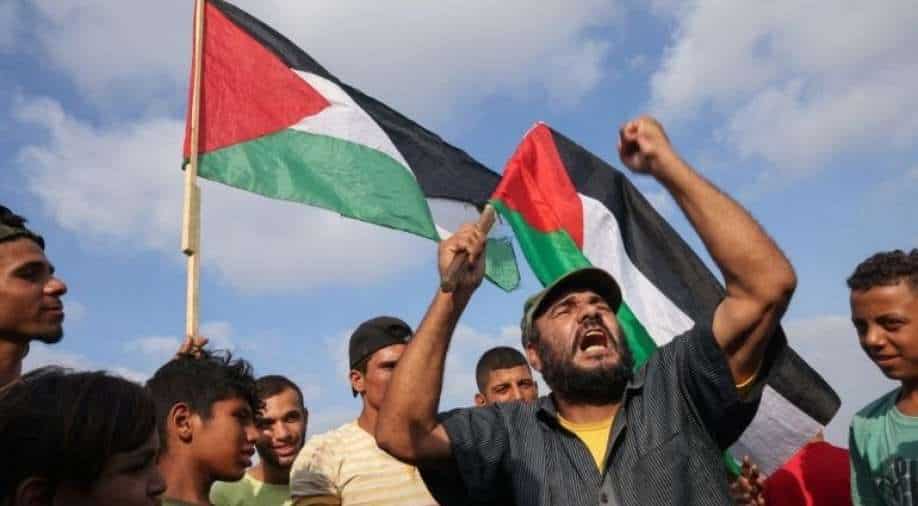 Palestinian protesters react during a demonstration by the border fence with Israel, east of Gaza City, to denounce the Israeli siege of the Palestinian strip and express support for Jerusalem's Al-Aqsa mosque, on August 21, 2021. Photograph:( AFP )

The Hamas Islamic movement that rules Gaza had called a protest Saturday to mark the burning 52 years ago of Jerusalem's Al-Aqsa Mosque, the third-holiest site in Islam

"Twenty-four civilians were injured, including 10 children," the ministry said in a statement.

"Two of the injuries are critical, one of whom is a 13-year-old boy, who was hit in the head east of Gaza City."

The Israeli army told AFP "hundreds of rioters and demonstrators" had gathered along the border fence.

"Troops are prepared in the area and are using riot dispersal means, and if necessary, .22 calibre rounds," the army said.

The Hamas Islamic movement that rules Gaza had called a protest Saturday to mark the burning 52 years ago of Jerusalem's Al-Aqsa Mosque, the third-holiest site in Islam.

"Al-Aqsa Mosque is a red line, and any attack on it will be met with valiant resistance from our people," the movement said in a statement.

The protest came exactly three months since Israel and Hamas reached a truce following their deadliest fighting in years.

Over 11 days in May, Israel pounded Gaza with airstrikes in response to rockets fired from the enclave.

Reconstruction in Gaza has stalled since a May 21 ceasefire, in part because of a crippling blockade Israel has maintained on the enclave since Hamas seized power in 2007.

On Thursday, Israel announced it would allow funds from Qatar to reach impoverished Palestinians in Gaza. Other restrictions remain.

In 2018, Gazans began a protest movement demanding an end to Israel's blockade and a right for Palestinians to return to lands they fled after the Jewish state was founded.

The Hamas-backed weekly demonstrations, often violent, sputtered as Israel killed some 350 Palestinians in Gaza over more than a year.