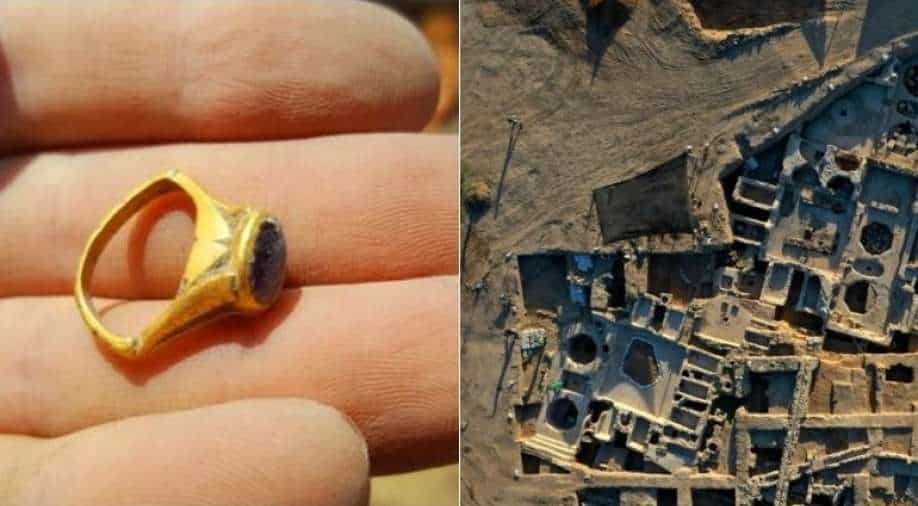 Archaeologists from the Israel Antiquities Authority (IAA) have uncovered a spectacular gold ring with amethyst in Yavne, a city in the Central district of Israel.

An antique gold ring decorated with a semiprecious stone and may be used as a convenient hangover cure was recently unearthed during an excavation in Yavne, in the country's central area, according to the Israel Antiquities Authority on Tuesday.

The ring, which weighs 5.11 grammes (0.18 ounces) and has a purple stone placed on top, was discovered at a location that also houses the world's biggest known Byzantine-era winepress, according to the IAA.

According to the IAA, it dates back to at least the 7th century, although it might be up to four centuries older.

"The person who owned the ring was affluent, and the wearing of the jewel indicated their status and wealth. Such rings could be worn by both men and women," said Dr Amir Golani, an expert on ancient jewellery at the IAA.

"A semi-precious stone called amethyst was placed in the ring."

"Amethysts are mentioned in the Bible as one of the 12 precious stones worn by the high priest of the Temple on his ceremonial breastplate."

"Many virtues have been attached to this gem, including the prevention of the side effect of drinking, the hangover."

The ring was discovered only 150 metres (492 feet) away from the ruins of a warehouse housing amphora, a type of wine vessel.

The excavation site has been dated to the 7th century, at the end of the Byzantine era and the beginning of the Early Islamic period, while experts believe the ring might be earlier.