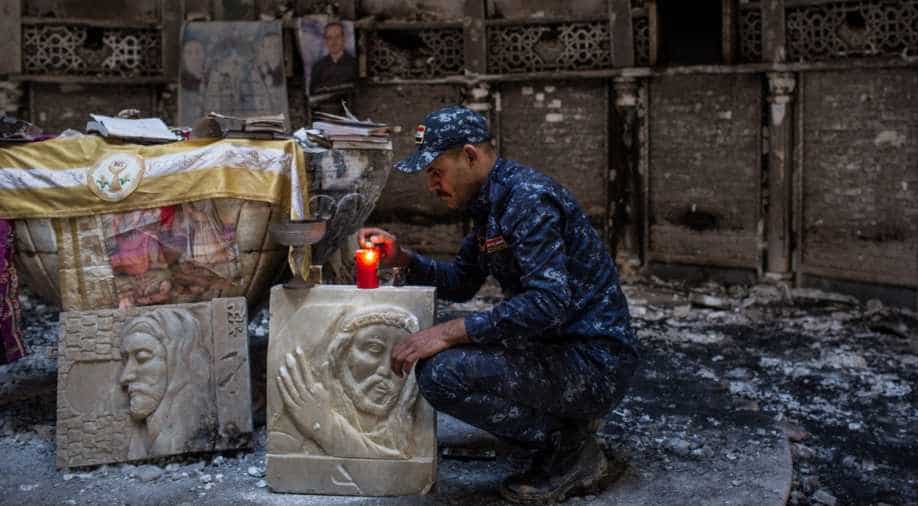 A member of the Iraqi federal police lights a candle inside a church burned and destroyed by ISIS during their occupation of the predominantly Christian town of Qaraqosh on December 27, 2016 in Qaraqosh, Iraq. Photograph:(Getty)
Follow Us

Islamic State attacked an Iraqi police checkpoint near the southern city of Najaf on Sunday, killing seven policemen as government forces in the north made more gains against the militants in Mosul, their last major stronghold in the country.

The Najaf attack, which involved gunmen and a suicide car bomb, followed blasts a day earlier in Baghdad that left 29 people dead, a reminder of Islamic State's continued ability to operate away from territory under its control.

The recapture of Mosul would probably spell the end for the group's self-styled caliphate in it areas seised in 2014, but the militants would still be capable of fighting a guerrilla-style insurgency in Iraq, and plotting or inspiring attacks on the West.

Since the US-backed offensive began on October 17, elite forces have retaken a quarter of Mosul in the biggest ground operation in Iraq since the 2003 US-led invasion that toppled Saddam Hussein. Prime Minister Haider al-Abadi has said the group would be driven out of the country by April.

The second phase of the campaign launched on Thursday following weeks of deadlock has pushed Islamic State out of several more areas despite fierce resistance.

The fourth day of the renewed push saw incremental advances on the eastern and southeastern fronts.

A military statement said the counter-terrorism forces had retaken part of Karama district. A federal police officer said Iraqi forces had taken near total control of Intisar and Siha neighbourhoods, and were clearing Salam.

"For the fourth day in a row, federal police units supported by the army are on the offensive," he told Reuters at a forward base in Intisar.

The attack near Najaf, 500 kilometres south of Mosul, happened when two vehicles travelling through the desert were stopped at a police checkpoint around al-Qadisiya town, local police sources said. The driver detonated an explosive load and the second vehicle fled. Police pursued it and killed the two militants inside.

In a statement distributed online by supporters, Islamic State claimed responsibility for the attack, which also wounded 17 people including civilians. It said four gunmen had opened fire before detonating explosive vests and then a fifth assailant launched a suicide car bomb. It was not immediately possible to reconcile those accounts.

Although the militants are vastly outnumbered in Mosul, they have embedded themselves among residents, hindering Iraqi forces who are trying to avoid civilian casualties. Despite food and water shortages, most civilians have stayed in their homes rather than fleeing as had been expected.

Thousands more people have fled their homes since the military's new push began, many under the cover of darkness to avoid detection by Islamic State. Families leaving Mithaq district on Sunday had to climb over earthen berms the military has built across roads to block car bombs.

One resident reached by phone in eastern Mosul said he had never seen such heavy bombardment. Several civilians were wounded when a mortar fell in his street, but they could not be ferried to the hospital on the western side of the city because air strikes have taken all the bridges out of service.

"One of them is my friend. His stomach is bleeding badly. We found a doctor in the neighbourhood to treat him but I fear he will die if he stays like this for long," he said.

A resident of Karama district said Islamic State had begun forcing residents out of some areas, burning the cars of residents who refused to move. "They want to clear out the neighbourhood before the Iraqi forces enter," he said.