'Is it not too hard right now?', former French President Hollande asks Macron 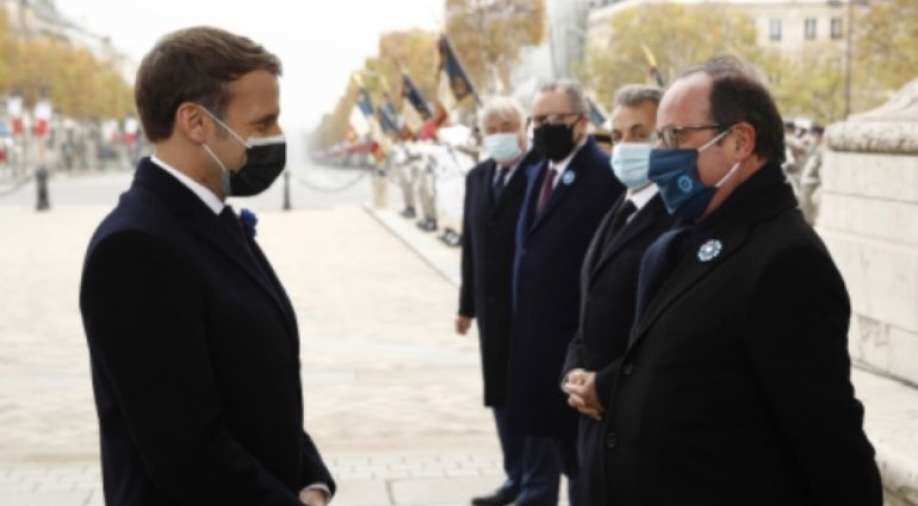 French President Emmanuel Macron salutes French former President Francois Hollande as he attends a ceremony at the Arc de Triomphe, as part of the commemorations marking the 102nd anniversary of the 11 November 1918 armistice, ending World War I in Paris, Photograph:( Reuters )

Former President of France Francois Hollande on Wednesday spoke to his successor Emmanuel Macron and asked him how he was doing, given the delicate situation in the country

Former President of France Francois Hollande on Wednesday spoke to his successor Emmanuel Macron and asked him how he was doing, given the delicate situation in the country.

France is battling not only the COVID-19 pandemic, but also a sharp rise in Islamic extremism. Last month, a French teacher was beheaded in daylight for showing caricatures of Prophet Muhammad in his class about freedom of expression.

"How are you doing? Is it not too hard right now?" Hollande asked Macron. They met during a tribute to the soldiers who were killed during World War One at the Arc de Triomphe on the Paris Champs Elysees.

Macron responded with the following: “Yes. Thank you for being here. We have to talk about it."

Hollande himself has seen Islamist terror attacks. In 2015, Paris was attacked, and a year later the city of Nice was attacked. Hollande had faced low ratings in 2016, due to which he decided not to seek re-election.

Macron and Hollande have not always shared a very good relationship. Macron was his former economy minister, who then quit the Socialist government to run for president.

Hollande had written a book called Lessons of Power, in which he recorded five years in office. He had warned Macron of the following: “Don't forget French royals lost their heads at the guillotine".

As the backlash against French President Emmanuel Macron continues to mount, France is considering appointing a special envoy to quell Muslim nations' anger directed towards Macron.

Also read: 'I hear your anger, but won't accept violence': Macron to the Muslim community

The French president has already given a long interview to Al Jazeera Arabic describing them his approach post the beheading of French teacher Samuel Paty and other terror attacks.

There has been a rising number of radical attacks in France following the killing of Paty for showing Prophet Muhammad's cartoons.

Several Islamic countries, including Turkey, Pakistan, and Bangladesh have protested against Macron's comments where he criticised extremism and defended France's freedom of expression and secularism.