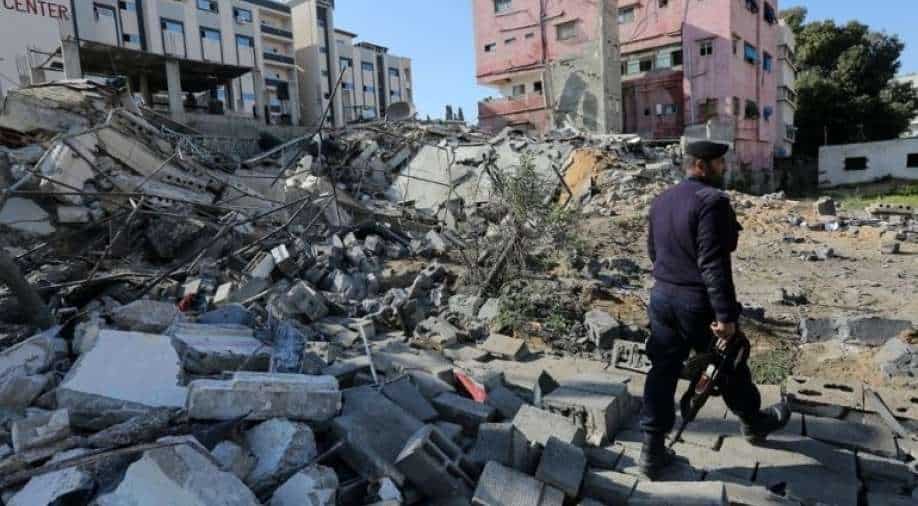 A picture taken on March 26, 2019, shows a Hamas policeman standing guard next to the rubble of a building in Gaza City, after Israeli air strikes hit dozens of sites across the Strip overnight in response to rocket fire from the Palestinian enclave.  Photograph:( AFP )

Israel cites historical and biblical links to the West Bank and around 450,000 of its settlers live there, among 3 million Palestinians. It also denies any systematic violation of the human rights of Palestinians.

Ireland has become the first EU member state to declare the building of Israeli settlements in Palestinian territories as de facto annexation.

Ireland's Minister for Foreign Affairs, Simon Coveney, said a Sinn Féin motion on the issue "is a clear signal of the depth of feeling across Ireland."

He said that Ireland is the first EU state to say so, adding that he does not "do it lightly".

But he also insisted on adding a condemnation of recent rocket attacks on Israel by Palestinian militant group Hamas before he agreed to government support for the motion, which had been tabled by the opposition Sinn Fein party.

"The scale, pace and strategic nature of Israel`s actions on settlement expansion and the intent behind it have brought us to a point where we need to be honest about what is happening on the ground. ... It is de facto annexation," Coveney told parliament.

"This is not something that I, or in my view this house, says lightly. We are the first EU state to do so. But it reflects the huge concern we have about the intent of the actions and of course, their impact," he said.

Most countries view settlements Israel has built-in territory captured in the 1967 Middle East war as illegal and as an obstacle to peace with the Palestinians. The United States and Israel dispute this.

Israel cites historical and biblical links to the West Bank and around 450,000 of its settlers live there, among 3 million Palestinians. It also denies any systematic violation of the human rights of Palestinians.

The motion came days after a ceasefire ended 11 days of the worst fighting between Palestinian militants and Israel in years. The violence sparked large pro-Palestinian protests in Dublin.

"The acts of terror by Hamas and other militant groups in firing rockets indiscriminately into Israel... cannot and should not ever be justified," Coveney said.