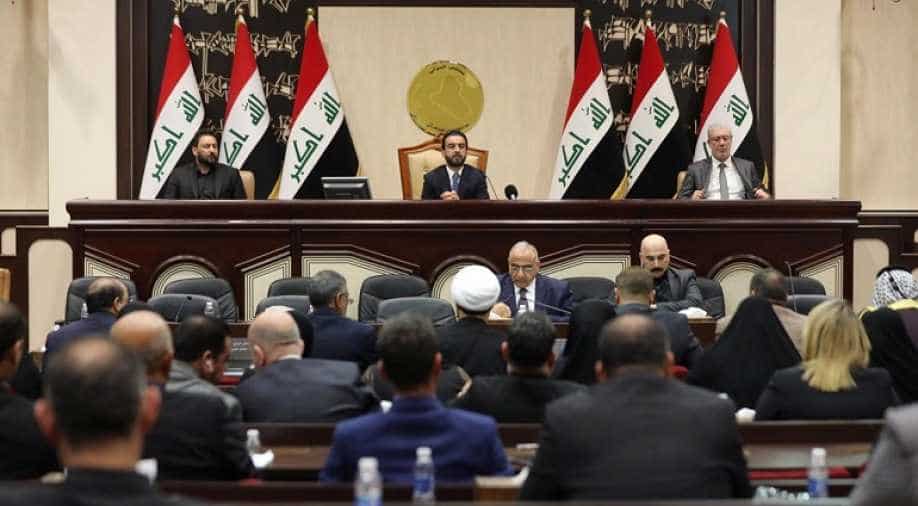 Members of the Iraqi parliament are seen at the parliament in Baghdad, Iraq January 5, 2020. Photograph:( Reuters )

A resolution passed by a special session of parliament said the government should cancel its request for assistance from a US-led coalition.

The Iraqi parliament on Sunday passed a motion calling for the expulsion of US troops, in the aftermath of the assassination of Iranian general and the leader of Iraq’s Hezbollah militia by the US outside Baghdad airport on Friday.

There are an estimated 6,000 US troops based in Iraq, whose primary function had been helping train the Iraqi military in anti-Isis operations, but their presence has become controversial.

There is considerable unhappiness in Iraq that Donald Trump authorised the unannounced drone strike on Suleimani and others on Iraqi soil. But few believe the US will be forced to remove its forces.

A resolution passed by a special session of parliament said the government should cancel its request for assistance from a US-led coalition, reported news agency Reuters.

Parliament resolutions, unlike laws, are non-binding to the government. But this one is likely to be heeded: Prime Minister Adel Abdul Mahdi had earlier called on parliament to end foreign troop presence as soon as possible, the Reuters report stated.

"Despite the internal and external difficulties that we might face, it remains best for Iraq on principle and practically," Abdul Mahdi said.