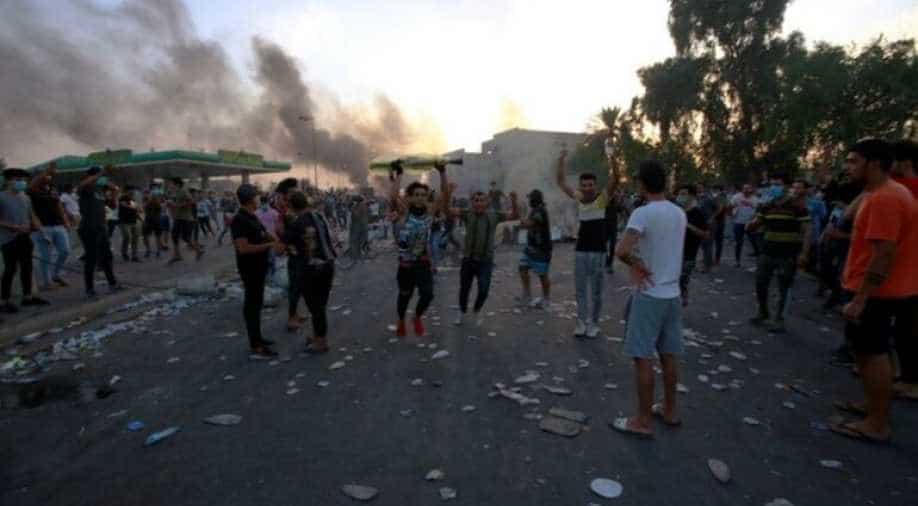 A demonstrator holds a weapon seized from the Iraqi security forces at a protest during a curfew, two days after the nationwide anti-government protests turned violent, in Baghdad, Iraq October 3, 2019. Photograph:( Reuters )

Police shot at a small group of protesters in Baghdad on Friday after three deadly days of anti-government unrest.

At least 27 people have been killed so far in violent demonstrations that have escalated by the day, sweeping across southern cities since they first erupted on Tuesday.

The unrest, fuelled by popular rage over poor living standards and corruption, is the first major challenge for Abdul Mahdi, who took office last year backed by Shi'ite parties that have dominated Iraq since the 2003 fall of Saddam Hussein.

It also comes on the eve of the Arbaeen Shi'ite pilgrimage, when as many as 20 million worshippers are expected to journey for days on foot across southern Iraq in the world's biggest annual gathering, ten times the size of the Mecca Hajj.

The Iraqi capital was mostly quiet ahead of Muslim Friday prayers. An ongoing curfew, defied by thousands of demonstrators on Thursday, saw the army and special forces deploy around central squares and streets.

Iraqis expect large protests to erupt later in the day, absent a meaningful response from politicians they accuse of holding back Iraq's recovery from years of conflict through corruption and neglect.

Abdul Mahdi acknowledged the public discontent in an overnight television message, insisting politicians were aware of the suffering of the masses: "We do not live in ivory towers - we walk among you in the streets of Baghdad," he said.

He called for calm and for support from lawmakers to reshuffle cabinet posts away from the influence of big parties and groups. He said a basic wage for poor families would be discussed by the government, but that no "magic solutions" had been available to fix the country.

Out on the streets of Baghdad overnight, protesters gathered by a bonfire set among the flaming wreckage of an armoured vehicle, across the Tigris River from the government compound.

"They are shooting live fire at the Iraqi people and the revolutionaries. We can cross the bridge and take them out of the Green Zone!" a man shouted to Reuters TV

Two years after the defeat of the Islamic State Sunni militant movement, Iraq has finally been at peace and free to trade for the first extended period since the 1970s. Oil production is at record levels providing windfall income for Baghdad. Yet after decades of war and sanctions, infrastructure is still decrepit, cities are in ruins and there are few employment opportunities for a population of 40 million.

Protesters say they funds are being siphoned off by political parties who have a firm grip on power in Baghdad.

They clashed with security forces in mass demonstrations that began in Baghdad on Tuesday and spread to cities in the southern Shi'ite heartland. Hundreds of people have been wounded as security forces opened fire to disperse the crowds, and demonstrators in some areas have shot back.