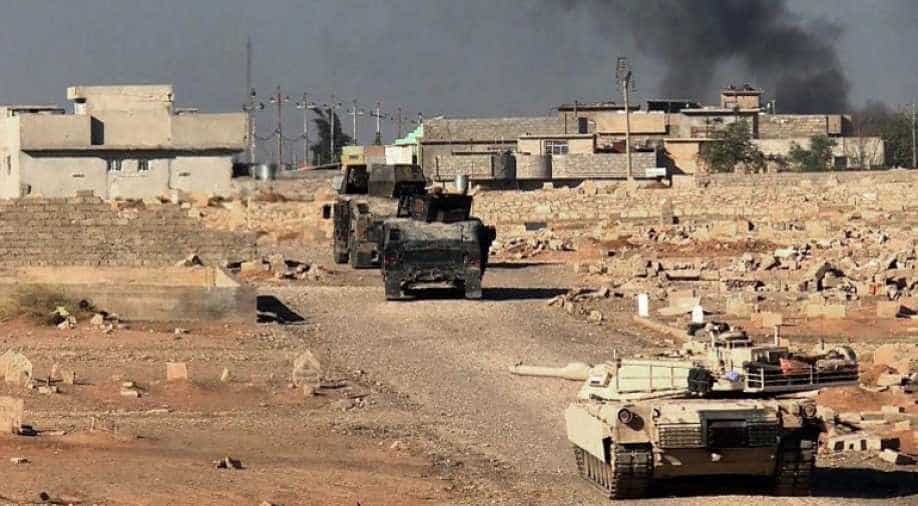 Iraqi Prime Minister Haider al-Abadi, speaking on a visit to the eastern front, said he brought 'a message to the residents inside Mosul who are hostages in the hands of Daesh (Islamic State) - we will liberate you soon'. Photograph:( AFP )

Iraqi security forces drove Islamic State fighters from the centre of a town just south of the militants' main stronghold of Mosul on Saturday and reached within a few km (miles) of an airport on the edge of the city, a senior commander said.

Lieutenant-General Raed Shakir Jawdat said security forces were in control of the centre of Hammam al-Alil, about 15 km (10 miles) south of Mosul, although he did not say whether the militants had been pushed out completely.

The advance on the southern front comes days after Iraqi special forces fought their way into the eastern side of Mosul, taking control of six neighbourhoods according to Iraqi officials and restoring a foothold in the city for the first time since the army retreated ignominiously two years ago.

Another unit advanced further north up the western bank of the Tigris river on Saturday, Jawdat added. "Our elite forces have reached an area just 4 km (2 1/2 miles) from Mosul airport," he told Al-Hurra television channel.

Recapturing Mosul would crush the Iraqi half of a caliphate declared by Islamic State leader Abu Bakr al-Baghdadi from the pulpit of a Mosul mosque in 2014. His Islamist group also controls large parts of east Syria.

Recapturing Mosul would crush the Iraqi half of a caliphate declared by Islamic State leader Abu Bakr al-Baghdadi from the pulpit of a Mosul mosque in 2014. His Islamist group also controls large parts of east Syria

There were no reports of further gains in the east of the city on Saturday, and officers said the military was clearing areas it took in recent days.

Iraqi Prime Minister Haider al-Abadi, speaking on a visit to the eastern front, said he brought "a message to the residents inside Mosul who are hostages in the hands of Daesh (Islamic State) - we will liberate you soon".

Abadi said progress in the nearly three-week-old campaign, and the advance into Mosul itself, had been faster than expected. But in the face of fierce resistance, which has included suicide car bombings, sniper fire and roadside bombs, he suggested that progress may be intermittent.

"Our heroic forces will not retreat and will not be broken. Maybe in the face of terrorist acts, criminal acts, there will be some delay," he said.

General Jawdat said his forces had destroyed 17 bomb-laden cars which had targeted them on their advance north.

So far the army controls only a small part of Mosul which was home to 2 million people before Islamic State took over in 2014. More than 1 million remain in the city - by far the largest under Islamic State control in either Iraq or Syria.

A Reuters correspondent in the village of Ali Rash, about 7 km (4 miles) southeast of the city, saw smoke rising from eastern districts on Saturday, while air strikes, artillery and gunfire could be heard.

The United Nations has warned of a possible exodus of hundreds of thousands of refugees. So far only 31,000 have been displaced, of which more than 3,000 have already returned to their homes, said William Lacy Swing, head of the International Organization for Migration.

"We're trying to prepare accordingly, but it's very difficult to do contingency planning with any level of accuracy because we don't know what they’re going to find when they get inside".

The assault on Hammam al-Alil, about 15 km (10 miles) south of Mosul, targeted a force of at least 70 Islamic State fighters there, commander of the Mosul operations Major-General Najm al-Jabouri said.

Jabouri said the assault began around 10 a.m. (0700 GMT) and some militants had tried to escape across the river, although others put up heavy resistance and the troops had thwarted three attempted suicide car bombings.

"(The battle) is very important - it's the last town for us before Mosul," Jabouri told reporters. Iraqi helicopters were supporting the army, he said, backed also by jets from a U.S.-led air coalition.

He said the jihadists were using hundreds of people as human shields, although it was not clear how many civilians were left in the town. Before Islamic State swept in more than two years ago, Hammam al-Alil and outlying villages had a population of 65,000.

As well as forcing residents to stay as they came under attack in Hammam al-Alil, Islamic State fighters retreating north in the last two weeks have forced thousands to march with them as cover from air strikes, villagers have told Reuters.

The United Nations said the militants transported 1,600 abducted civilians from Hammam al-Alil to the town of Tal Afar, west of Mosul, on Tuesday and took another 150 families from the town to Mosul the next day.

Jabouri said a man he described as a senior Islamic State figure, Ammar Salih Ahmed Abu Bakr, was killed by federal police - who are fighting with the army in Hammam al-Alil - as he tried to escape by car.

Many of the remaining militants were non-Iraqis, he said. "There are at least 70 Daesh fighters in the town. The majority are foreign fighters, so they don't know where to go. They are just moving from place to place."