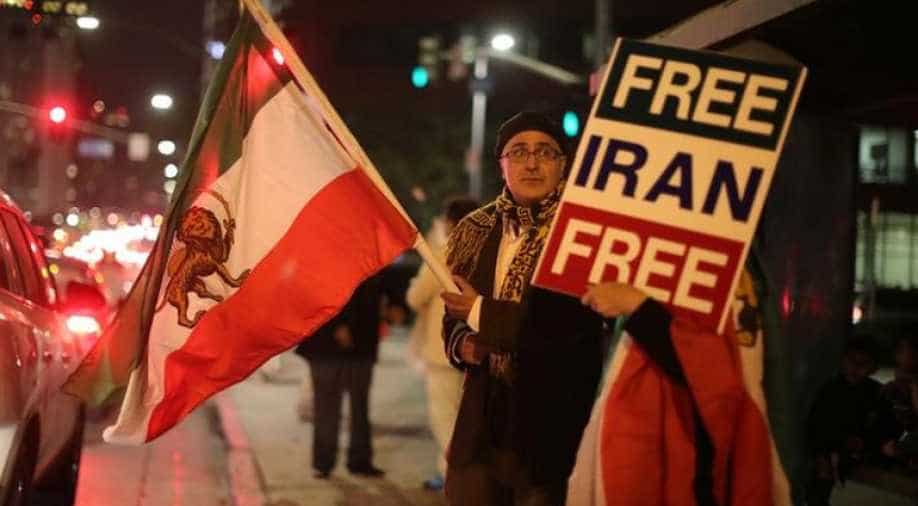 Unrest spread to more than 80 cities and rural towns as thousands of young and working class Iranians voiced anger at graft, unemployment and a deepening gap between rich and poor.? Photograph:( Reuters )

Tens of thousands of government supporters rallied across Iran on Friday, swearing allegiance to the clerical establishment and accusing arch-enemy the United States of instigating the biggest anti-government protests for nearly a decade, state TV reported.

Tehran`s Friday prayer leader called on authorities to deal "firmly" with those responsible for igniting over a week of demonstrations, in which 22 people have died and more than 1,000 have been arrested, according to Iranian officials.

"But those ordinary Iranians who were deceived by these American-backed rioters should be dealt with based on Islamic clemency," cleric Ahmad Khatami told worshippers at Tehran university, TV reported.

Protests erupted on December 28 in the holy Shi`ite city of Mashhad after the government announced plans to raise fuel prices and cut monthly cash handouts to lower-income Iranians.

Unrest spread to more than 80 cities and rural towns as thousands of young and working class Iranians voiced anger at graft, unemployment and a deepening gap between rich and poor.

Some 42,000 people took part in the unrest across the country, Interior Minister Abdolreza Rahmani Fazli was quoted as saying by state TV.

Iranian officials said the protests were the result of foreign instigation and mocked US President Donald Trump`s support of protesters against what he called a “brutal and corrupt” establishment.

The authorities have produced no evidence of any US role in the demonstrations, which have lacked a unifying leader.

Russian Deputy Foreign Minister Sergei Ryabkov said Iran`s statements that external influences fomented the unrest were not groundless and that Washington used any possible method to destabilise governments it disliked.

He added that US calls for an extraordinary meeting of the UN Security Council to discuss the turmoil in Iran interfered with the country`s sovereignty, news agency Interfax said. The Council met on Friday to discuss Iran.

Iranian Ambassador to the United Nations Gholamali Khoshroo told the UN Security Council meeting that the United States had abused its power as a permanent member of the Council by calling for a meeting on the turmoil in Iran.

He added that Iran had “hard evidence” that recent protests in Iran were “very clearly directed from abroad”.

But US Ambassador to UN Nikki Haley said the United States stood "unapologetically with those in Iran who seek freedom for themselves, prosperity for their families, and dignity for their nation".

"We will not be quiet. No dishonest attempt to call protesters `puppets of foreign powers` will change that. The Iranian people know the truth. And we know the truth," she told the UN meeting on Iran.

Residents contacted by Reuters in various cities said the protests had shown sign of abating since Thursday after the establishment intensified a crackdown on the protesters by dispatching Revolutionary Guards forces to several provinces.

Iran`s elite Guards and its affiliated Basij militia suppressed the country`s 2009 unrest over alleged election fraud, in which dozens of pro-reform Iranians were killed.

Television footage of rallies in several cities showed people chanting "We support Imam Khamenei ... We will not leave him alone in his fight against enemies".

"Demonstrators demand the punishment of those behind foreign-linked riots which insulted religion and our authorities," state television reported, referring to unrest in which social media footage showed protesters tearing down pictures of Khamenei.

"There are workers who say they have not received their salaries for months ... These problems should be resolved," Khatami said, according to state TV.

But Khamenei and his hardline allies have criticised Iranian President Hassan Rouhani for failing to revive the economy after most sanctions on Iran were lifted in 2016 under a deal reached between Tehran and major powers aimed at curbing the country`s nuclear programme.

Rouhani secured the deal in 2015, raising hopes of better economic times among many Iranians, but discontent has since risen over the lack of broad improvement in living standards.