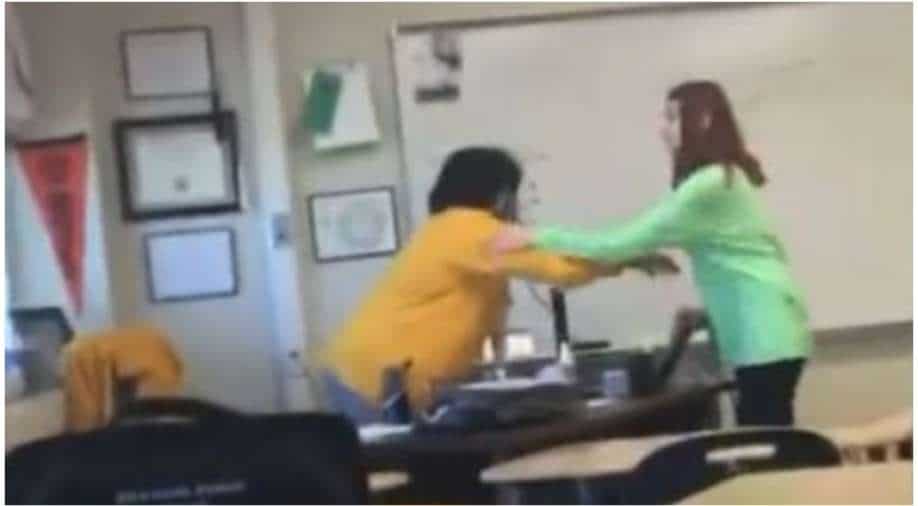 Grab from a video of the incident doing rounds on social media Photograph:( Twitter )

The teacher has been praised by officials for keeping her calm even when she was being assaulted. The incident has taken place Castleberry High School in Texas, USA

A viral video doing rounds on social media has captured a shocking incident in which a white student can be seen hitting a Black teacher. The incident took place in a school named Castleberry High School in Texas, USA.

In the video, the student can be seen walking towards the teacher who appears to be making a call. The female student comes and takes the receiver from teacher's hands and hits her on her left arm.

The student then can be heard talking to her mom and asks her to speak with the teacher 'because she is black'.

Castleberry Independent School District officials have put out a statement and praised the teacher who kept her calm even in the face of literal assault. The statement said that teacher's handling of the incident was exemplary 'throughout the entirety of the incident even when the situation turned violent and offensive.'

“Harassment, racism and violence against our teachers will not be tolerated at Castleberry ISD, and we will take swift and effective action to protect our teachers so that they can perform their duties and educate students in a safe environment," the statement said.

As per media reports the school will hold an internal investigation into the matter and as physical assault was involved, the matter will be reported to law enforcement authorities as well.