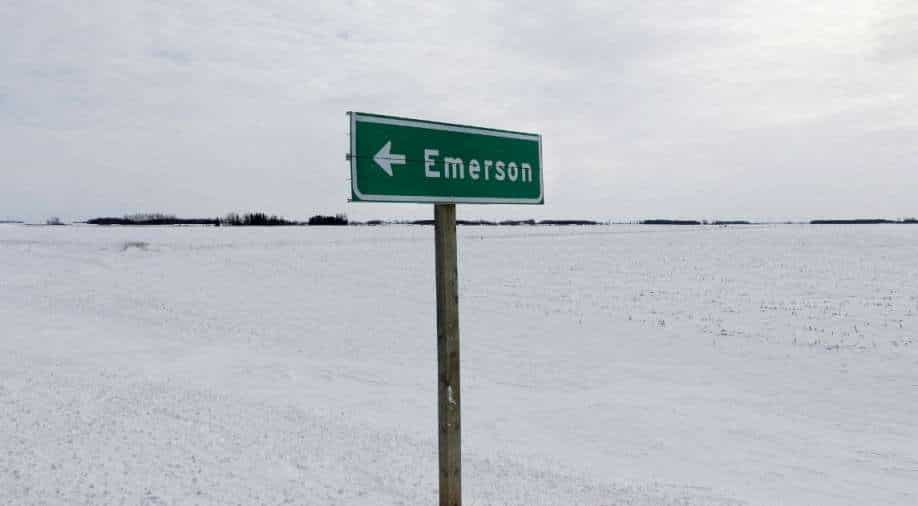 A sign post for the small border town of Emerson, near the Canada-US border crossing in Emerson, Manitoba, Canada. Photograph:( Reuters )

A family of four Indians, including a baby, froze to death as they were allegedly trying to cross the US-Canada border illegally in a sub-zero temperature.

As per a report by The Indian Express, the family is believed to be from a small village in the Gandhinagar region, which is in the eastern state of Gujarat. The report added that another seven people have been detained by US authorities.

It should be noted that there is no official statement on the identities of the people who died. Meanwhile, Gandhinagar District Collector Kuldeep Arya was quoted by the media outlet as saying: "This is an unfortunate incident which we got to know only through the media and there is no official communication yet."

"In case there is any communication from the MEA (Ministry of External Affairs), we will facilitate at our level," he added.

Responding to the incident, India's Minister of External Affairs of India S Jaishankar on January 21 said, "Shocked by the report that 4 Indian nationals, including an infant have lost their lives at the Canada-US border. Have asked our Ambassadors in the US and Canada to urgently respond to the situation."

On the other hand, Canadian Prime Minister Justin Trudeau on Jan 21 said that his government is doing all it can to stop people-smuggling across the US border.

"It was an absolutely mind-blowing story. It's so tragic to see a family die like that, victims of human traffickers and of people who took advantage of their desire to build a better life," Trudeau told a news conference.

Meanwhile, US authorities have charged a US man with human trafficking after the incident was reported in the province of Manitoba, a few yards north of the frontier with Minnesota.

An unfortunate and tragic incident. We are in touch with US authorities on their ongoing investigation. A consular team from @IndiainChicago is travelling today to Minnesota to coordinate and provide any assistance required https://t.co/syyA59EoB2