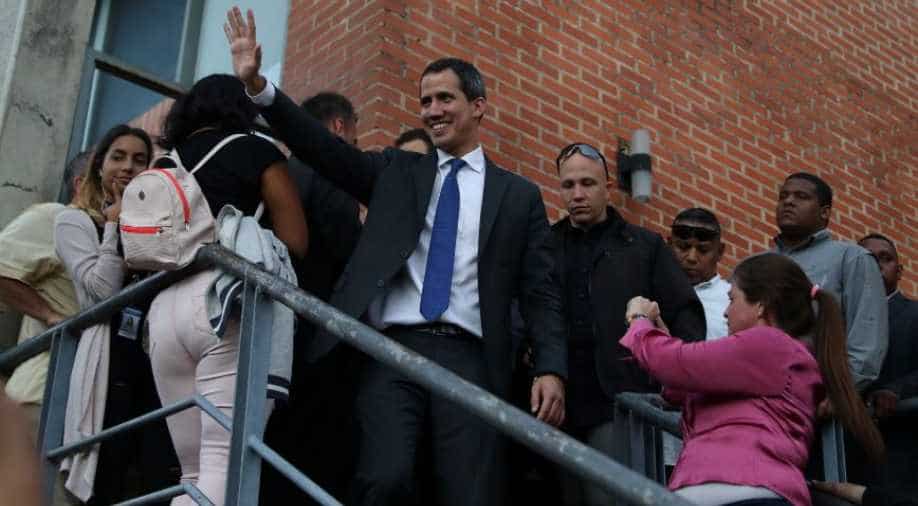 In a new 'democratic transition framework,' Secretary of State Mike Pompeo said that Maduro and Guaido should set up an interim government with members of both their parties

The United States on Tuesday called on Venezuela's Juan Guaido to renounce his claim to the presidency at least temporarily as it recalibrated its strategy to oust leader Nicolas Maduro.

The shift came after more than a year of faltering US-led efforts to oust the leftist Maduro and as Guaido comes under growing pressure, with authorities on Tuesday summoning him over charges of attempting a coup.

In a new "democratic transition framework," Secretary of State Mike Pompeo said that Maduro and Guaido should set up an interim government with members of both their parties that will arrange elections in six to 12 months.

If fully implemented, the United States and European Union would lift sanctions, including sweeping US restrictions on Venezuela's vital oil exports and on Maduro and his allies as individuals, the State Department said.

The IMF and other international lenders would be invited to consider economic relief for Venezuela, from which millions have fled as they face dire shortages of food and other necessities.

The plan also calls for the departure of foreign forces from Venezuela, a reference to the regime's support from Cuba and Russia.

"We believe this framework protects the interests and equities of all Venezuelan people who desperately seek a resolution to their dire political, economic and humanitarian crisis, and who know Venezuelans can have something better," Pompeo said, urging all sides to consider it "carefully and seriously."

But Maduro has repeatedly ruled out stepping aside and Guaido himself proposed a transitional government in failed, Norwegian-brokered talks last year.

Pompeo signalled that US goals have not changed, saying that Washington still supported Guaido -- a 36-year-old engineer who has been recognized as interim president by some 60 countries since January 2019.

And while the framework says that any Venezuela citizen can run for president in future elections, Pompeo reiterated that the United States wanted Maduro out.

"We've made clear all along that Nicolas Maduro will never again govern Venezuela," Pompeo told reporters.

"I think he's the most popular politician in Venezuela. I think if there were an election held today, he could do incredibly well," Pompeo said.

"But more importantly we continue to support him. When we put together this pathway to democracy, we work closely with him."

Elliott Abrams, the US point man on Venezuela, said that Guaido would remain head of the National Assembly -- a position from which he derives his legitimacy following wide allegations of fraud in Maduro's 2018 re-election.

But Abrams said that any person who heads the transitional government would not be allowed to run for president.

Guaido welcomed Pompeo's initiative, writing on Twitter: "This is the time to rise; we are taking the right steps to save Venezuela."

Hours earlier, Venezuelan Attorney General Tarek William Saab said on state television that Guaido had been summoned to appear before prosecutors in an investigation into the seizure of weapons in neighboring Colombia.

Saab alleged that the arms were to be smuggled into Venezuela. Colombia last week said it seized a weapons cache linked to a retired Venezuelan general, Cliver Alcala -- who last week surrendered to US authorities on drug-trafficking charges.

Alcala on Tuesday pleaded not guilty before a federal court in New York.

He was once close to late president Hugo Chavez, Maduro's predecessor and ideological inspiration. But Saab charged that Alcala was taking orders from Guaido.

Opposition supporters say that the Venezuelan judiciary regularly trumps up charges for political reasons, although Guaido has been allowed to operate freely, even after he flew to Washington earlier this year to meet President Donald Trump.

The United States last week also filed drug-trafficking charges against Maduro, casting him as a common criminal with a $15 million bounty on his head.