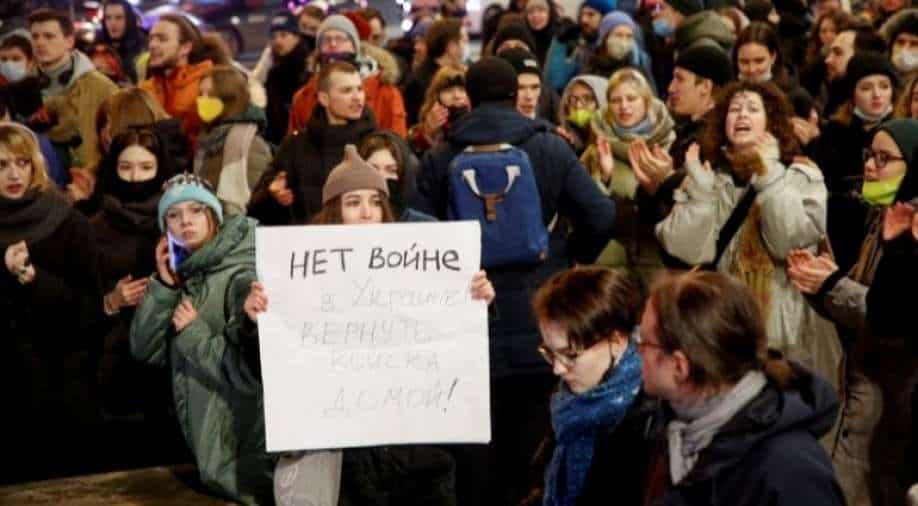 A demonstrator displays a placard during an anti-war protest in Saint Petersburg, Russia, after President Vladimir Putin authorised a military operation in eastern Ukraine. The placard reads: 'No to war in Ukraine! Return the forces home!'.  Photograph:( Reuters )

In the early hours of Thursday, a number of Russian activists called on social media for people to take to the streets after Putin launched an offensive on Ukraine.

Around Pushkin Square in Moscow, protesters chanted "No to war!"

"I am in shock. My relatives and loved ones live in Ukraine," Anastasia Nestulya, 23, said in Moscow.

"What can I tell them over the phone? You hang in there?" She said many were afraid to protest.

In Saint Petersburg, many struck a similar note.

"I have a feeling that the authorities have gone mad," said Svetlana Volkova, 27. The Russian protestor said that most people were unwilling to protest.

"People have been fooled by propaganda."

As he was dragged away by three police officers, a young man shouted: "Who are you fighting with? Arrest Putin."

In recent years, protest laws in Russia have been toughened, and demonstrations often result in mass arrests.

Alexei Navalny, the jailed opposition leader who used to organise Russia's largest anti-Putin protests said he was against the invasion of Ukraine on Thursday.

The independent television channel Dozhd published a video in which Navalny was heard saying, "I am against this war.".

"This war between Russia and Ukraine was unleashed to cover up the theft from Russian citizens and divert their attention from problems that exist inside the country," the 45-year-old said.

"One should be aware of the negative legal consequences of these actions in the form of prosecution up to criminal liability," the committee said.

On social media, these arrests have earned Russia and Putin some major scorn with some going so far as to label the Russian premier a "tyrant".

1400 arrested across 51 locations at #antiwar protests in Russia. I stand with them. This is NOT Russia attacking, but a tyrant who needs to go #NoMoreWar

800 people arrested at Moscow antiwar protest. Russia is a fascist state and will hopefully someday be dissolved. https://t.co/1sAlRYkWJP

🙏 #Ukraine also for those in Russia being arrested for #AntiWar protests as they stand up to Putin! #UkraineInvasion https://t.co/uRGBCcTQsD

Many have come out in support of the protestors

To protest in Russia against the Russian government is the benchmark for all of us. #moscow #StPetersburg #protest #antiwar #Ukraine

#antiwar protest in #Russia
The police arrests the protestors. One of them: "Arrest Putin, not me" :) #UkraineRussiaConflict pic.twitter.com/kW3Le29Twa

This.
This is a freedom convoy. This is what it looks like to stand up to a dictator.