In a bid to keep up pressure on city's pro-Beijing leaders, Hong Kong protesters take aim at China station 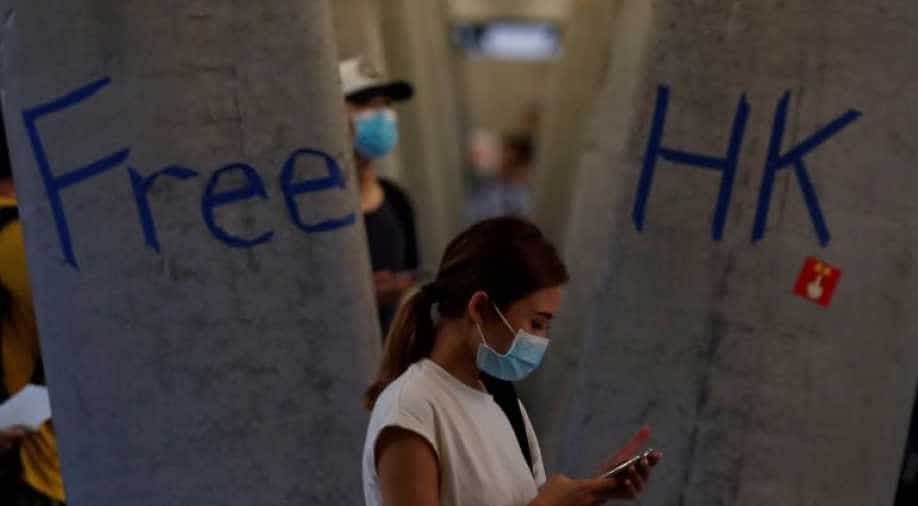 A woman attends a protest following a day of violence over a proposed extradition bill, under a footbridge leading to the Legislative Council building in Hong Kong, China, June 13, 2019. Photograph:( Reuters )

The rally is the first major protest planned since last Monday's unprecedented storming of parliament by largely young, masked protesters - a move which plunged the international financial hub further into crisis.

Anti-government protesters in Hong Kong plan to rally later Sunday outside a controversial station where high-speed trains depart for the Chinese mainland as they try to keep up pressure on the city's pro-Beijing leaders.

The rally is the first major protest planned since last Monday's unprecedented storming of parliament by largely young, masked protesters - a move which plunged the international financial hub further into crisis.

Hong Kong has been rocked by a month of huge peaceful protests as well as a series of separate violent confrontations with police, sparked by a law that would have allowed extraditions to mainland China.

The bill has since been postponed in response to the intense backlash but that has done little to quell public anger, which has evolved into a wider movement calling for democratic reforms and a halt to sliding freedoms in the semi-autonomous city.

Protesters are demanding the bill be scrapped entirely, an independent inquiry into police use of tear gas and rubber bullets, amnesty for those arrested, and for the city's unelected leader Carrie Lam to step down.

Beijing has thrown its full support behind Lam, calling on Hong Kong police to pursue anyone involved in the parliament storming and other clashes.

Sunday's rally - first mooted on encrypted messaging apps and online forums - is being billed as an opportunity to explain to Chinese mainlanders in the city what the protest movement is about.

It is the first to take place in Kowloon, across the harbour from the main island, and will begin at 3:00 pm (0700 GMT) in the Tsim Sha Tsui district, which is popular with mainland Chinese tourists.

Inside the Chinese mainland, where news and information is heavily censored, the Hong Kong protests have been portrayed as a primarily violent, foreign-funded plot to destabilise the motherland.

"I hope this march can tell mainland people what we are fighting for and plant a seed that opposes the tyranny," one user wrote on the Reddit-like LIHKG forum, which has been a key online gathering place for demonstrators.

Sunday's rally is not being organised by the same protest group behind three massive peaceful marches, making it difficult to predict the expected crowd size.

The protest will later march to West Kowloon, a recently opened multi-billion-dollar station that links to China's high-speed rail network.

The terminus is controversial because Chinese law operates in the parts of the station dealing with immigration and customs as well as the platforms, even though West Kowloon is miles from the border further north.

Critics say that move gave away part of the city's territory to an increasingly assertive Beijing.

Local politician Ventus Lau Wing-hong, one of those organising the rally, said they would "protest in a peaceful, rational and elegant way" adding there was no desire to occupy the station given the catalyst for their movement was opposing people being sent to the mainland.

But local authorities appeared to be taking no chances.

The station's operator announced only passengers with existing tickets would be allowed inside the building while all but two entrances would be shuttered alongside restaurants and parking bays. New ticket sales were also halted for Sunday.

Under Hong Kong's mini-constitution - the Basic Law - China's national laws do not apply to the city apart from in limited areas, including defence.

Hong Kong also enjoys rights unseen on the mainland, including freedom of speech, protected by a deal made before the city was handed back to China by Britain in 1997.

But there are growing fears those liberties are being eroded.

Among recent watershed moments, critics point to are the disappearance into mainland custody of dissident booksellers, the disqualification of prominent politicians, the de facto expulsion of a foreign journalist and the jailing of democracy protest leaders.

Authorities have also resisted calls for the city's leader to be directly elected by the people.

A 79-day occupation of key intersections in 2014 calling for universal suffrage failed to win any concessions from Beijing.