'I'm going to see this through': UK PM May vows to fight for Brexit deal 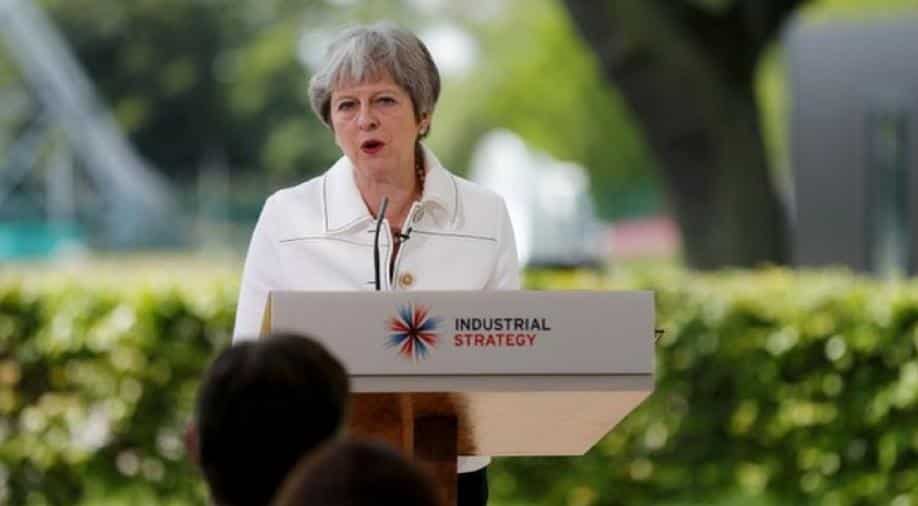 Just over 12 hours after May announced that her cabinet had agreed to the terms of the deal, Brexit minister Dominic Raab and work and pensions minister Esther McVey resigned.

Prime Minister Theresa May vowed to fight for her draft divorce deal with the European Union on Thursday after the resignation of her Brexit secretary and other ministers put her strategy and her job in peril.

Just over 12 hours after May announced that her cabinet had agreed to the terms of the deal, Brexit minister Dominic Raab and work and pensions minister Esther McVey resigned.

Eurosceptics in May's Conservative Party said they had submitted letters calling for a vote of no confidence in her leadership.

May called a news conference at her Downing Street residence to underline her determination to stay the course.

Asked if she would contest any challenge to her position, she replied: "Am I going to see this through? Yes."

However, hostility from government and opposition lawmakers raised the risk that the deal would be rejected in parliament and that Britain could leave the EU on March 29 without a safety net.

That prospect pushed the pound down as much as 2 per cent to $1.2731, although it recovered slightly after May's statement.

The main stock index in Ireland, which is highly dependent on trade with Britain, plunged 3.8 per cent.

The German carmaker BMW, which produces its Mini model in Britain, said that, with the political situation so uncertain, it would continue to prepare for a 'no-deal' Brexit.

May said she understood their unhappiness, but added: "I believe with every fibre of my being that the course I have set out is the right one for our country and all our people ...

"I am going to do my job of getting the best deal for Britain."

By seeking to preserve the closest possible ties with the EU, May has upset her party's many advocates of a clean break, and Northern Ireland's Democratic Unionist Party (DUP), which props up her minority government.

Meanwhile, proponents of closer relations with the EU in her own party and the Labour opposition say the deal squanders the advantages of membership for little gain.

Both sides say it effectively cedes power to the EU without securing the promised benefits of greater autonomy.

"It is ... mathematically impossible to get this deal through the House of Commons. The stark reality is that it was dead on arrival," said Conservative Brexit-supporting lawmaker Mark Francois.

The deal will need the backing of about 320 of parliament's 650 MPs to pass.

The ultimate outcome remains uncertain. Scenarios include May's deal ultimately winning approval; May losing her job; Britain leaving the bloc with no agreement; or even another referendum.

Analysts from US bank Citi said Britain was now likely either to stay in the EU or leave without a deal.

Jacob Rees-Mogg, the leader of a Conservative eurosceptic group in parliament, said the draft was "worse than anticipated", and he had formally requested a vote of no confidence in May.

At least 14 Conservative lawmakers openly said they had submitted such letters, although others could have done so secretly. Forty-eight are needed to trigger a challenge.

But May told parliament: "The choice is clear. We can choose to leave with no deal, we can risk no Brexit at all, or we can choose to unite and support the best deal that can be negotiated."

Rees-Mogg told journalists the next prime minister should be someone who believed in Brexit.

But a May ally, former interior minister Amber Rudd, told Sky News: "The problem isn't the prime minister. The problem is the challenges she's got to deliver in trying to pull together this Brexit. She's the best person to do it."

The Labour Party said the government was "falling apart".

"NO ABILITY TO EXIT"

In parliament, lawmakers from all sides spent three hours mostly attacking the draft, agreed with the EU on Tuesday after more than a year of difficult negotiations.

"No democratic nation has ever signed up to be bound by such an extensive regime, imposed externally without any democratic control over the laws to be applied, nor the ability to decide to exit the arrangement," Raab said in his resignation letter.

Others said the so-called "Irish backstop", to be used if no better way can be found to avoid future checks on the border between the British province of Northern Ireland and EU-member Ireland, would tear Britain apart, leaving Northern Ireland all but inside the EU's single market.

It was this arrangement, which sees Britain and the EU establishing a single customs territory, but Northern Ireland aligned more closely with the EU, that spurred most criticism.

The DUP has threatened to pull its support from the minority government if the backstop means the province is treated differently from mainland Britain.

EU leaders are ready to meet on Nov. 25 to sign off on the divorce deal, or Withdrawal Agreement, but French Prime Minister Edouard Philippe summed up the uncertainty when he said events in London raised concerns about whether it would be ratified.

"We need to prepare ourselves for a no-deal Brexit," he said.

A group of EU states including France also raised objections to what has been agreed so far on fishing between the EU and UK after Brexit, diplomatic sources said.

Raab, 44, was named Brexit secretary in July after the resignation of his predecessor David Davis, who also quit in protest at May's strategy.

At the heart of Raab's criticism was the belief that the pursuit of a temporary customs union with the EU would be the starting point for talks on the future relationship with the bloc, "severely prejudicing" what Britain could achieve.

He said he could not support an indefinite backstop arrangement, and that May's plan threatened the integrity of the United Kingdom.