Trump trumps Kim in popularity among residents of Vietnamese capital 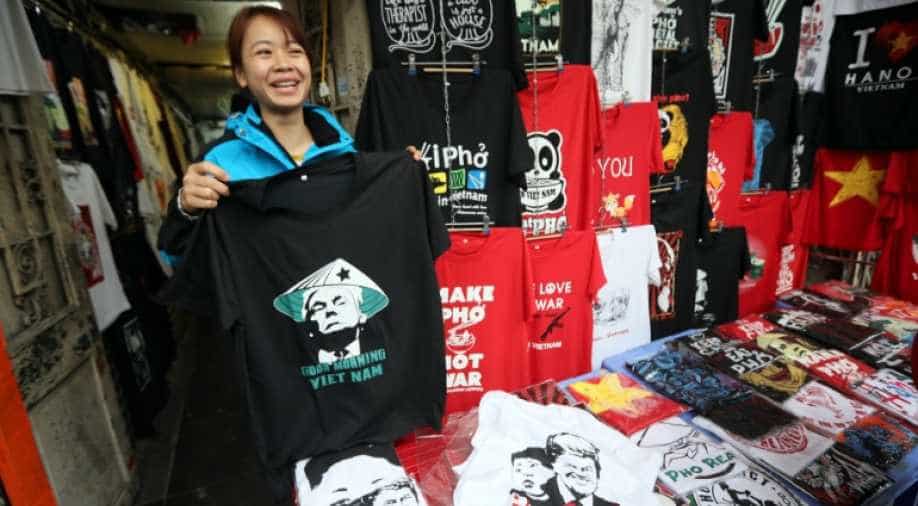 A woman holds a newly designed and printed t-shirt with the portraits of US President Donald Trump at a store in Hanoi. Photograph:( Agencia EFE )

Trump's fortune is one of the main reasons for his popularity among the Vietnamese, who often consider wealth to be a personal virtue, and many people in Hanoi have decided to dye their hair to resemble the US president's.

As the city of Hanoi continued its frenzied preparations for a summit between the North Korean leader and United States president on Tuesday, the local Vietnamese population appears to admire the latter's vast wealth, uncompromising politics and strong personality.

Donald Trump and Kim Jong-un are due to meet on Wednesday to discuss the denuclearization of the Pyongyang regime, as agreed on at their first summit held in Singapore in June last year.

"(Trump) is an intense, firm man, who gives everything for America and its people. He was already a millionaire before he became president. He is not there for money, he is making a sacrifice. I don't like Kim because he is a dictator and does not support policies of openness," An, a 40-year-old taxi driver, told EFE.

Trump's fortune is one of the main reasons for his popularity among the Vietnamese, who often consider wealth to be a personal virtue, and many people in Hanoi have decided to dye their hair to resemble the US president's.

"I like Trump more than Kim because he is rich and more powerful," says Duc, a 19-year-old student, who like his other 20 friends has been sporting the characteristic hair colour of the White House resident.

Artist Tram Lan Binh says he is fascinated by Trump, not because of his bank balance but because of his physical appearance, his facial expressions and his strong personality, and has painted 50 colourful portraits of the US president in acrylic over recent years.

Some of them have been displayed in the cafe that he runs on the outskirts of the capital, along with a life-size sculpture of Trump dressed in a striking yellow vest and shorts.

"We managed to get some exhibited a year ago in Washington, in front of the White House. The paintings are not for sale because I made them with a lot of heart and not for money. I feel a special fondness for Trump, his open and direct nature, his facial expressions and the way he deals with pressure inspires me. I am not bothered about what people say," explained the 37-year-old artist.

"I most enjoy painting his eyes and his facial expressions," he added.

The cafe has been specially decorated for the summit, with the flags of the US and North Korea, calls for peace and the portraits of Trump and Kim, another source of inspiration for Binh.

"I made these paintings when I learnt about the summit, but I have had an interest in Kim for a while. I began to draw his portrait even before his first meeting with Trump. He is intelligent, firm, direct and brave for agreeing to meet with Trump," he said.

The painter says he is especially drawn to the physical features of the North Korean leader, his "beautiful lips and round face," and went on to describe him as "a living masterpiece."

Even though Kim does not enjoy Trump's popularity in Vietnam, there was one place in Hanoi that on Tuesday was eagerly looking forward to the North Korean leader's arrival: the Kindergarten of Friendship between North Korea and Vietnam.

In Kim's honour, children between three and six years old along with their teachers performed a song and dance dressed in traditional Vietnamese attire, with the flags of both countries painted on their cheeks.

The kindergarten was built in 1978 with funds from Pyongyang, and is now one of the most prestigious preschools in Hanoi, with 450 students and 17 classrooms, one of them dedicated to Kim Il-sung, the founder of North Korea and Kim Jong-un's grandfather.

Some of the teachers hope that Kim's agenda, which has not been made public by North Korean officials, will include a visit to their kindergarten.

"We are all very hopeful; we don't know if he will come, but if he does, we will be prepared to give him a welcome," said one of the teachers.