Trump-Kim II: The summit, the script, and the sequel 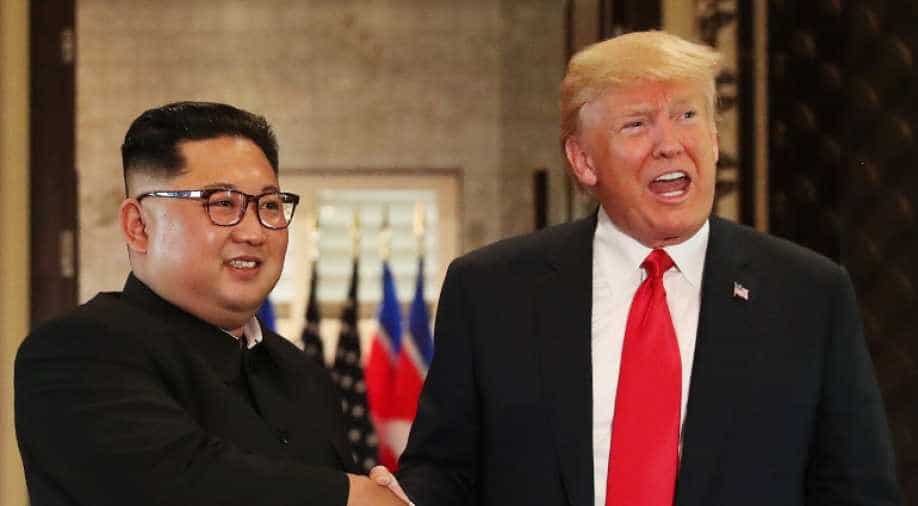 For the sequel, set in Hanoi this week, US President Donald Trump and North Korean leader Kim Jong Un will have to contend with harder questions.

Their first meeting in Singapore was a blockbuster piece of diplomatic theatre criticised as light on substance.

For the sequel, set in Hanoi this week, US President Donald Trump and North Korean leader Kim Jong Un will have to contend with harder questions.

Here is a look at what was exactly agreed in Singapore last year and what has transpired since then.

What did the Singapore statement say?

The inaugural summit between the leaders of two countries that never signed a peace treaty after the 1950-53 Korean War was brief -- from 9 am to 2 pm.

In a short pronouncement, they pledged to seek a "lasting and stable peace regime", with Kim committing "to work toward complete denuclearisation of the Korean Peninsula".

There were no specific details, and disagreement over its interpretation has caused follow-up negotiations to stall.

Even South Korea's dovish President Moon Jae-in, who seized on last year's Winter Olympics to broker talks between rivals who had been trading personal insults and threats of war, has since described the text as "somewhat vague".

What does Washington say?

In the months since Singapore, Washington has pushed to maintain sanctions against the North until it's "final, fully verified denuclearisation" and has repeatedly referred to "the denuclearisation of North Korea as agreed to by Chairman Kim".

But that is not what the words in the statement say, and throughout the process with Trump Pyongyang has never made a public commitment to give up its weapons, rather than denuclearising the peninsula as a whole.

Diplomats say Washington's phrasing could be a negotiating ploy by the Trump administration, effectively daring Pyongyang to come out and deny it.

What is Pyongyang's view?

The North has condemned US Secretary of State Mike Pompeo's insistence on its nuclear disarmament as "gangster-like".

It has long understood the denuclearisation of "the peninsula" as taking in issues such as the US military presence in South Korea and Washington's nuclear umbrella over Seoul, and a lengthy commentary carried by the official KCNA news agency in December urged the US to "study geography".

"When we talk about the Korean Peninsula, it includes the territory of our republic and also the entire region of (South Korea) where the United States has placed its invasive force," it said.

Pyongyang says it has already taken substantive measures by stopping missile and nuclear testing and the time has come for the US to respond with moves of its own, such as lifting sanctions.

And in his New Year's Speech, North Korean leader Kim said Pyongyang is committed to denuclearisation of the peninsula - but only if Washington drops economic sanctions.

Is there a way through?

Stephen Biegun, the US Special Representative for North Korea, has stressed that Washington has no intention of easing its US or United Nations sanctions on Pyongyang.

But, he has said, "we are prepared to explore (a) number of other things that could build trust".

Earlier this month he told a Stanford University audience: "I have this perfect outcome moment where the last nuclear weapon leaves North Korea, the sanctions are lifted, the flag goes up in the embassy and the treaty is signed in the same hour.

"Now that's an ideal, I know, and these things are going to move haltingly along different courses."

How do Trump and Kim get on?

In 2017, as missiles flew and North Korean ground shook to the blast of a nuclear test, they called each other "dotard" and "Rocket Man".

But the Singapore meeting began with a one-on-one meeting, with only their translators present.

Trump has since hailed his "great chemistry" with Kim and says he has "gotten to know him & fully understand how capable he is", dangling the prospect of the impoverished, sanctions-hit North becoming a "great Economic Powerhouse" under Kim.

"He wrote me beautiful letters," the US president told a rally in October. "And they're great letters. We fell in love."