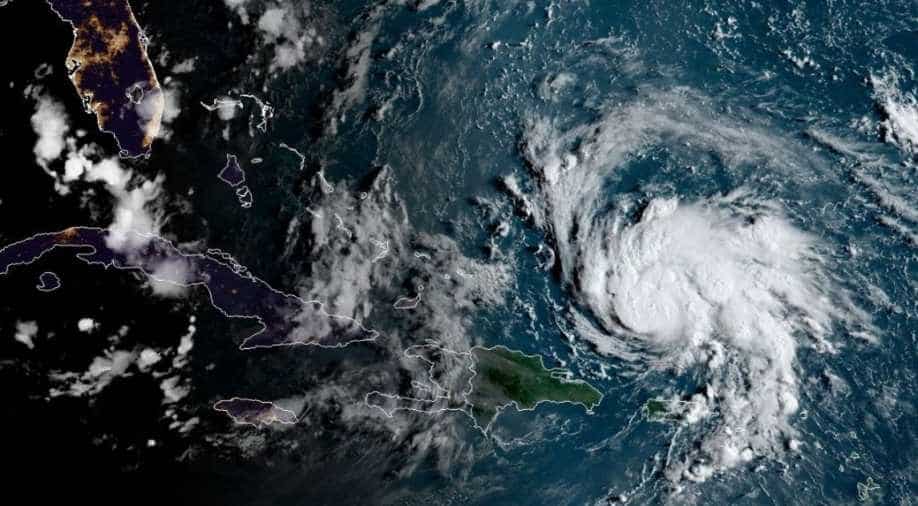 Hurricane Dorian took aim at the Bahamas and the Florida coast on Thursday, spurred on by warm Atlantic waters as it threatens to strengthen into a dangerous Category 3 storm.

Dorian earlier sideswiped the Caribbean without doing major damage but is expected to strengthen and slam the Bahamas and the southeastern United States with rain, strong winds and life-threatening surf over the next few days, the Miami-based National Hurricane Center said in an advisory.

US President Donald Trump urged Floridians to heed official warnings. Governor Ron DeSantis declared a state of emergency on Wednesday and asked residents along the state's east coast to stock up with at least seven days worth of supplies such as food and water.

"Hurricane Dorian looks like it will be hitting Florida late Sunday night," Trump wrote on Twitter. "Be prepared and please follow State and Federal instructions, it will be a very big Hurricane, perhaps one of the biggest!"

Hurricane Dorian looks like it will be hitting Florida late Sunday night. Be prepared and please follow State and Federal instructions, it will be a very big Hurricane, perhaps one of the biggest!

The US Coast Guard on Wednesday said that all pleasure boats at the Port of Key West should seek safe harbour before the Labor Day weekend begins and ocean-going vessels should make plans to leave the port ahead of the storm.

Dorian, currently a Category 1 storm, is expected to grow into a Category 3 on the five-step Saffir-Simpson scale of intensity, with winds greater than 111 mph (178 km/h) by the time it makes landfall, most likely on Florida's eastern coast on Monday, before lingering over central Florida on Tuesday, forecasters at the National Hurricane Center said.

Early on Thursday, the hurricane centre said Dorian was packing maximum sustained winds of 85 miles per hour (137 km per hour) some 150 miles (240 km) north-northwest of San Juan, and about 425 miles (685 km) east-southeast of the southeastern Bahamas.

"On this track, Dorian should move over the Atlantic well east of the southeastern and central Bahamas today and on Friday," forecasters said, "and approach the northwestern Bahamas on Saturday."

Dorian is expected to become a major hurricane by Friday afternoon and continue to gain strength until it makes landfall.

Puerto Rico is still struggling to recover from back-to-back hurricanes in 2017 that killed about 3,000 people soon after the island filed for bankruptcy. On Wednesday, it escaped fresh disaster as Dorian avoided the territory and headed northwest toward Florida.

Preparations were mounted in the Bahamas, which could be hard hit.

Jeffrey Simmons, the country's acting director of the Department of Meteorology, said severe weather could strike the southeast Bahamas and the Turks and Caicos Islands on Friday.