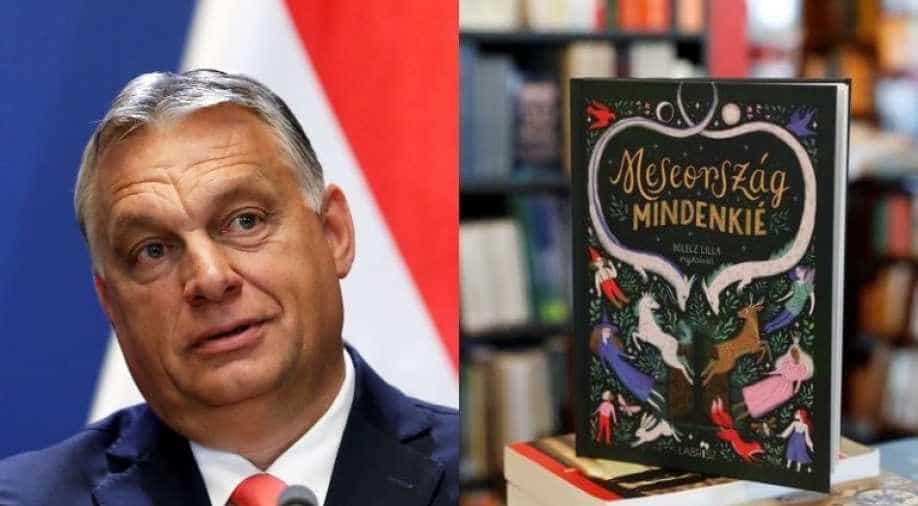 Hungary's Prime Minister Viktor Orban and a book "Wonderland is for everyone", that has galvanized public debate and has drawn attacks from politicians of the ruling Fidesz party, is pictured at a bookstore in Budapest Photograph:( Reuters )

The book called "Wonderland Is For Everyone'' has been published by a lesbian group called Labrisz Lesbian Association.

Earlier, Hungarian Prime Minister Viktor Orban had said Sunday that homosexuals should "leave our children alone" when asked about a children's book containing gay characters that was publicly shredded by a far-right politician.

"Hungary has laws pertaining to homosexuality, the basis of which is an exceptionally tolerant and patient approach," Orban said during a regular interview on public radio.

"But there is a red line that you cannot cross," Orban said, referring to the book as a "provocative act".

"To sum up my opinion on this: leave our children alone," he said.

The remarks were prompted by a row over a children's story book published by an LGBT association entitled "Storyworld is for everyone" that included gay characters.

A politician from the far-right fringe Our Homeland party tore the book apart and shredded it at a press conference and called it homosexual propaganda.

"Sexual identity is a private matter but there is a threshold ... namely that homosexual propaganda should not be directed at children," Gergely Gulyas said, adding this amounted to endangering minors.

Dorottya Redai, a project leader with the publisher responded: "We reject the unfounded accusations that we would be causing harm to children." The politician's remarks amounted to "hate propaganda" she added.

In power since 2010, Orban has promised to "build a new era" with major cultural changes in Hungary. His government has so far refrained from strong attacks on the LGBT+ community, unlike Poland, where homophobia has been part of the ruling PiS party's ideology and election strategy.

However parliament, with the ruling party's majority, voted in May to ban transgender people from changing their gender on identity documents.

Bulcsu Hunyadi, an analyst at think tank Political Capital said the government seized on the book to prevent the far-right dominating the agenda, but was unlikely to step up its anti-LGBT stance to the extent seen in Poland ahead of the 2022 parliamentary elections.

"Hungarian society is a lot more secular and more accepting towards LGBT people (than Polish society)," he said. "This today ... could be followed with some policy moves but I don't think Fidesz will build a big campaign around the issue."

The first 1,500 copies of the book, which contains 17 stories with characters from various social backgrounds, sold out quickly.

The Hungarian Publishers' and Booksellers Association said several bookshops had been threatened and become the target of hate mongering. "Leave the bookshops alone," it said, rejecting condemnation of the book.