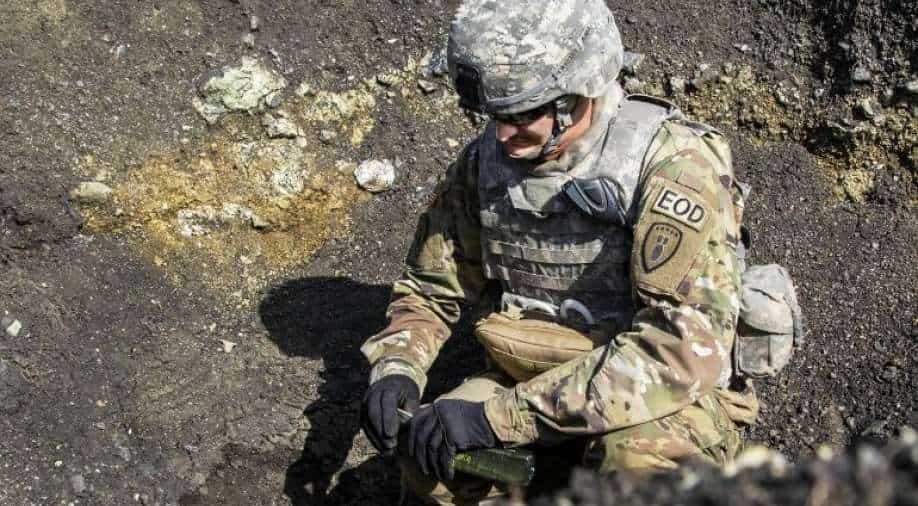 US Army Sgt. Eric Wallace places C4 explosives onto a stack of unexploded ordnances during a joint mine clearing operation at Orahovac Demolition Range in Kosovo Photograph:( AFP )

A new report has revealed that hundreds of weapons have been stolen from the US armed forces in the last 10 years.

The investigation, being conducted by the Associated Press, claims US troops faked records to cover up thefts.

Several explosives stolen from military shipments or bases were found at a US-Mexico border checkpoint.

Some of the stolen weapons were used in civilian crimes because they were sold to a street gang.

Artillery shells that disappeared from Camp Shelby were found at a Mississippi recycling yard in August.

An ammunition technician stationed at Quantico, Virginia stole four fragmentation grenades by falsely recording that they were exploded during training.

The report states that in 2018, armour-piercing grenades, hundreds of pounds of plastic explosives, as well as land mines and rockets were stolen from Camp Lejeune, the massive base on coastal North Carolina.

In response, Pentagon spokesman Lt. Col. Uriah Orland said, “We want to get the number to zero, so there is no loss, but it doesn’t mean that we don’t take seriously losses that happened.”

From 2010 to 2020, 1,900 entries explosives went missing. While half of these have been recovered, the other half still remains missing.

In response to a Freedom of Information Act request,  Capt. Andrew Wood said in a written statement “Some of it was later recovered and often these reports are attributed to human error, such as miscounting or improper documentation.”

Now, Congress is all set to require that the military give lawmakers detailed loss and theft reports every year.