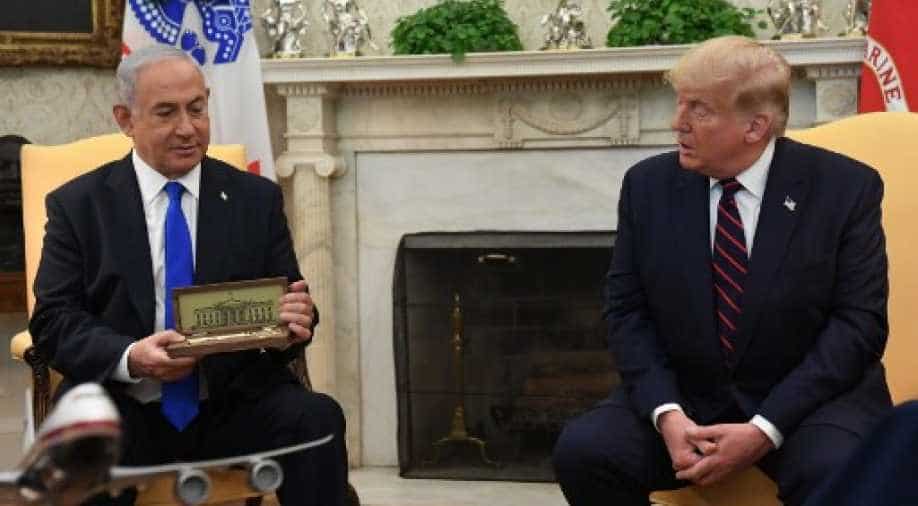 The West Asia peace accord was signed in Washington DC on Tuesday. Effective now, Israel’s ties with two Arab nations - UAE and Bahrain will be normalised

The West Asia peace accord was signed in Washington DC on Tuesday. Effective now, Israel’s ties with two Arab nations - UAE and Bahrain will be normalised.

However, the timing of this historic peace deal seems almost deliberate. In the US, President Donald Trump is trailing in the polls less than two months before the presidential election. And in Israel, Prime Minister Netanyahu is facing protests over corruption charges and his handling of the pandemic. Both Trump and Netanyahu have a lot to gain from the peace accords.

Trump wants to leave behind a legacy. Remember, he wanted his face carved into Mount Rushmore. He gets to be the third US president to broker a deal between Israel and the Arab world. Jimmy Carter brokered the Camp David accord between then-Egyptian President, Anwar Sadat and former Israeli Prime Minister Menachem Begin.

Bill Clinton brokered a deal between then-Israeli prime minister Yitzhak Rabin and Jordan's King Hussein. Trump can now call himself the architect of a new political order between Arabs and Jews. Trump's presidency has placed a lot of importance on trying to strike peace deals and brokering them.

Also read: Is the US-brokered Abraham Accord a regional front against Iran?

The one with North Korea fell apart. But this one, gives trump a much-needed boost in the election season. Trump recently claimed that 5 to 6 other Arab nations will join the circle of peace. So it is in the interest of West Asia that Trump remains in power. Due to this, the region is likely to tilt towards Trump over Biden. Netanyahu flew back to Israel without meeting Biden.“We are encouraged by the ongoing efforts to consolidate and expand such friendly relations based on shared interests and a shared commitment to a better future”, the last line of the Abraham Accord read.

What the US gains from this peace alliance is a united West Asia against Iran, a country that Trump has been calling the biggest exporter of terror.

Netanyahu fought 3 elections in one year, and failed to win all with a decisive mandate. He is currently running a precariously formed government.

Netanyahu is at a critical juncture in his political career, and has a difficult alliance with his election rival. He was recently indicted on corruption charges. Netanyahu is also facing protests for his handling of the pandemic. Even as he was flying to Washington to sign the Abraham Accords, protestors had gathered at the Ben Gurion airport in Tel Aviv.

With this deal, he's only the third Israeli leader to sign a peace deal with the Arab world. Netanyahu gets to keep the promise to annex the West Bank. At the same time he gets to have cordial relations with the Arab world. Within hours of the agreements being signed in the White House,  a prominent Saudi cleric softened his stand on Israel, calling for Muslims to avoid “passionate emotions and fiery enthusiasm” towards Jews.

The peace agreements allow Netanyahu to improve Israel's economy at a time when his country is dealing  with 18 per cent unemployment. Israel's tourism sector will get a boost, as will energy, healthcare, culture, technology and environment.

Israelis will now be able to board direct flights to the UAE and Bahrain. Until recently, Israel was recognised by only Jordan and Egypt in the Arab world.