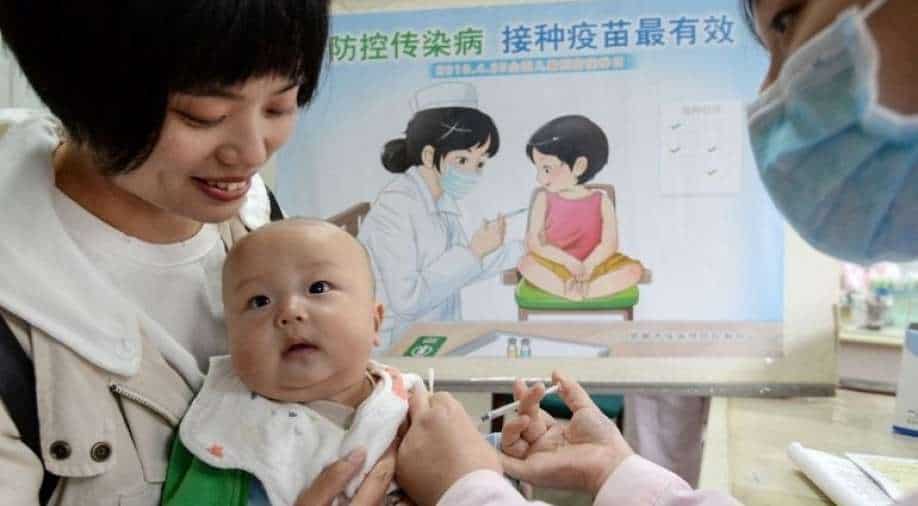 File photo: A child receives a vaccination at a hospital in China. Photograph:( AFP )

China introduced the one-child policy in the late 1970s in a dramatic effort to slow rapid population growth, before reversing it in 2016 to allow families to have two children as fears grew about the country's fast-ageing population and shrinking workforce.

But the change has not yet resulted in a baby boom, with empowered Chinese women often delaying or avoiding childbirth and young couples blaming rising costs and insufficient policy support for families.

The number of newborns in China plummeted 15 per cent in 2020 from a year earlier, according to the Ministry of Public Security, with the onset of the novel coronavirus disrupting the economy and weighing on decisions to have a family.

The gender balance was 52.7 per cent boys and 47.3 per cent girls, according to the data.

The data also comes after the Covid-19 pandemic wreaked havoc in the global economy, with many families nervous about job security.

In November, China started a once-a-decade census, with much of the attention on whether it indicates any population bump from the relaxation of family planning rules.

Demographic experts have estimated it could take 15 years for the two-child policy to have any noticeable effect on population numbers. Chinese retirees, meanwhile, are expected to number 300 million by 2025.

Meanwhile, China's state-owned news agency Xinhua said ''the change of policy is intended to balance population development and address the challenge of an ageing population.''

However, the one-child policy has led to a skewed population in China with the biggest gender imbalance in the world. Numbers worsened with high levels of female child mortality as China ended up with what was called ''missing females''.

Today, China has the world's most unbalanced sex ratio. For every 114 males, there are 100 females.

Globally, the average sex ratio at birth is about 105 boys for every 100 girls. But in China, there are 30 million more men.

These men are now having trouble finding wives, especially in rural areas. Men in rural areas are less educated and under-employed and they end up as less desirable suitors...

Men in rural areas of Shanxi, Henan and Hunan reportedly have to offer money as much as $155,000 when asking for a woman's hand in marriage.

In 2020, China's Global Times published an article saying the squeeze would become worse in 20 to 30 years.

What is China planning to do about it?

A Chinese NGO has proposed playing cupid. Meanwhile, a Shanxi-based think tank development association says  'leftover' urban women, who are above the age of 27, unmarried, highly-educated and urban, should be paired with surplus rural men.

This NGO advised these ''leftover'' women that they should not feel ''afraid to go and live in rural areas''.

It also proposed to the Chinese government that it should offer an incentive to encourage urban women to move to rural areas and provide vocational training to sheng nan or leftover men.

Women have been trafficking from northern Myanmar into China. These women were sold for anything between 3,000 to 13,000 dollars to Chinese families, as per reports. Once bought, women were held prisoners and pressured into producing babies.

Another scandal came to light in 2019 when Brides from Pakistan were being trafficked into China.

The Associated Press claimed that at least 629 women were sold to Chinese men. They were abused and raped.

The Chinese foreign ministry said it was unaware of it...

It said the two governments of China and Pakistan support the formation of happy families between their people on a voluntary basis in keeping with laws and regulations.

Disregard for consent can never be the answer to bridging the gender imbalance.

What can China do about its skewed sex ratio?

An article published in human rights watch has proposed polyandry. It asks whether multiple husbands can solve China's gender imbalance. But that is up to the country to decide.