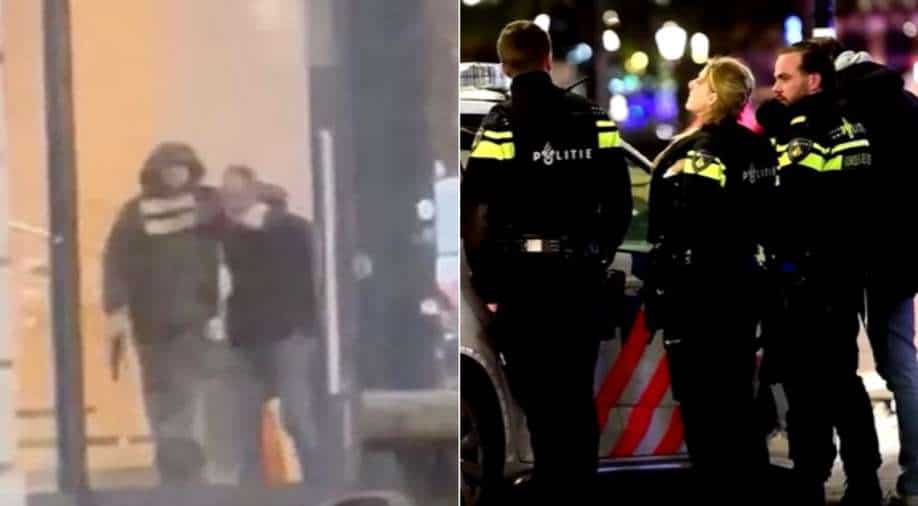 Images and videos of the hostage situation in Amsterdam were circulated on social media forums. Photograph:( Twitter )

As per the police, the gunman was "lying on the street and a robot was examining him for explosives"

Dutch police have ended a hostage situation after a man with a firearm held several people in Amsterdam's Apple flagship store on Tuesday (February 22).

Police have said that the hostage taker was overpowered after a siege lasting several hours and all the hostages had been freed.

Around 10:30 pm local time (2130 GMT), the gunman was arrested after he ran out of the building at the central Leidseplein square, which is in the heart of the Dutch city.

Previously, police had deployed several special units after they were alerted of an armed robbery at 5:40 pm local time (1640 GMT). It looks like the robbery had rapidly transformed into a hostage situation.

As per the police, the gunman was "lying on the street and a robot was examining him for explosives" in front of the Apple store.

Scary images and videos were circulated on social media forums where two people can be seen running out of the Apple store.

One of them being hit by an unmarked car, flying over the hood from the impact. However, there's no official verification of the images.

Tim Wagemakers, who is an independent journalist claimed that he was in a nearby building.

He had tweeted that there were heavily armed police at the site, adding that locals had been asked to remain inside and stay away from their windows.

There is an ongoing hostage situation in an Apple Store at #Leidseplein, Amsterdam (🇳🇱).

This comes shortly after reports of an armed robbery. There is a heavy police presence in the area.

Will update on the thread below: pic.twitter.com/3ZJuQEh5dd

NOW - Hostage situation at an Apple Store in #Amsterdam.pic.twitter.com/JZDXEvPjVx