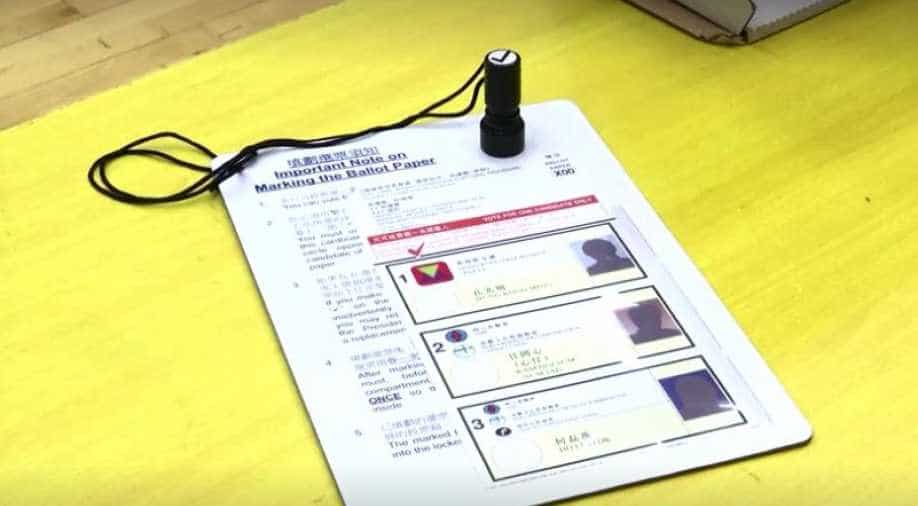 Polling stations are due to open across Hong Kong on Sunday morning as the semi-autonomous city of 7.5 million votes for district councillors

The ongoing district elections in Hong Kong have been dangerous owing to the anti-government protests in the city.

Polling stations are due to open across Hong Kong on Sunday morning as the semi-autonomous city of 7.5 million votes for district councillors, in a ballot seen as a gauge of the popularity of Chief Executive Carrie Lam and the pro-Beijing government.

First-time candidate Kwan Siu Lun says campaigning for this weekend's district elections in Hong Kong has been a dangerous business in the white heat of the city's political crisis.

In normal times, district elections are tame, hyper-local affairs dominated by candidates allied to the China-backed government with a remit over rubbish collections and planning decisions.

But with protests coursing through the city, pro-democracy candidates are hoping for a dramatic swing in their favour.

The protest movement needs a big turnout, it was 47 per cent the last time around in 2015, to give the unpopular government a bloody nose at the ballot box.

There are no disruptive actions planned so far for Sunday, while a "HOW TO CAST A VOTE" airdrop is urging young voters to turn up early, bring their ID and "avoid wearing black shirts and masks" or accidentally spoiling ballots.

In a city beset by violence, candidate Kwan says he has tried to tip-toe around the conflicting political opinions.

"I try to focus on local community issues," says the 38-year-old architect running as an independent on the pro-democracy side in his working-class constituency of Hung Hom.

"But of course some voters ask what my political views are... some people have sworn at me and thrown my leaflets to the ground."

The poll to choose 452 councillors across 18 districts is the closest voters in Hong Kong get to direct representation.

By contrast, members of the city's legislature are elected by a combination of the popular vote and industry groups stacked with Beijing loyalists, while the city's chief executive is chosen by a similarly pro-establishment committee.

This year it is "a kind of referendum" on the Hong Kong government's handling "of the riots over the extradition (bill), democracy and the conflicts between the people and the police", says political analyst Dixon Sing.

The political unrest of recent months has overshadowed what would normally be a calm campaign.

A pro-democracy candidate had his ear bitten off, while 17 other candidates of all stripes -- some seeking re-election -- have been arrested over protest-related activities.

Kwan says he did not plan to run. Then protests unfurled on June 9 against an extradition bill to China. They have not stopped since.

"I never thought about running before... I have a day job and I have a new-born baby," he told AFP, the pavement dug up around him by protesters seeking projectiles to hurl at police.

But "I felt deeply touched" by the protest movement, he said, explaining he sees district power as a way to help young people.

The challenges of campaigning during a political crisis cuts across colours.

Michelle Tang, an independent candidate affiliated with the pro-establishment camp, is seeking re-election in her constituency of Tsim Sha Tsui East.

The now-trashed Hong Kong Polytechnic University campus stands in her district, scene of an ongoing siege of pro-democracy protesters by police.

"Some shops have refused to put up my poster even though the owners privately support me" she said, explaining they are worried about provoking the protesters.

In the hurly-burly of a political crisis, it is also hard to predict who is likely to triumph in Sunday's poll.

But there is a strategic imperative for a protest movement that has brought millions onto the street to also flood the polling booths.

Under the city's convoluted China-scripted electoral system, seats on the district council could translate into 117 votes in the Election Committee, the mechanism by which a Chief Executive is chosen.

A big win at the grassroots level in the city's most free vote could help mobilise the pro-democracy bloc for next year's parliamentary elections, says analyst Sing.

Back on the city's febrile streets, candidates have the choice of fending off barrages of abuse or running muted campaigns.

"Some pro-establishment voters come to me and call me a 'cockroach', or a 'rioter'," says Isaac Ho, a pro-democracy candidate running for the first time in a government-allied stronghold in Kowloon.

"I just answer with a smile," he says.