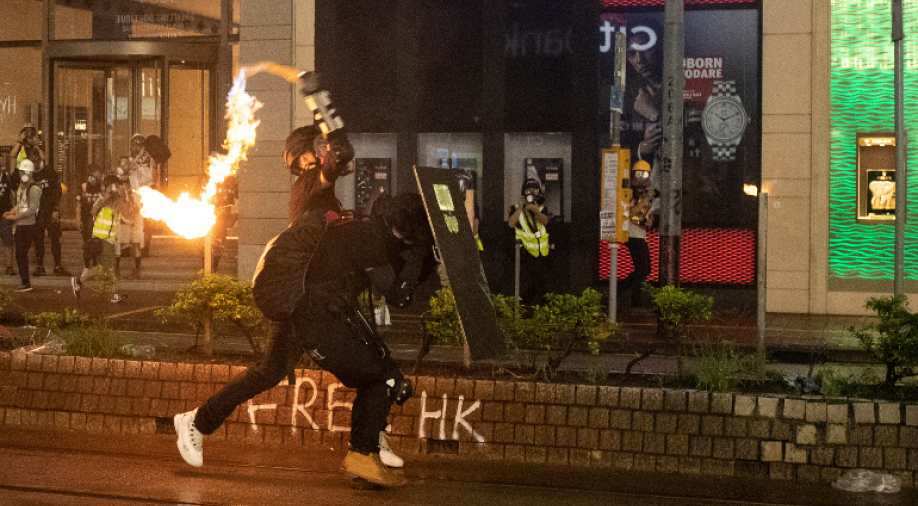 A demonstrator throws a molotov cocktail at police during a protest in Hong Kong, China. Photograph:(Reuters)
Follow Us

Police had banned a planned demonstration in the financial hub on security grounds, but tens of thousands defied authorities Saturday to march through the city's main highways for the 13th consecutive weekend

Hong Kong was reeling Sunday from some of the worst clashes to rock the city in months after hardcore pro-democracy protesters hurled petrol bombs at police who fired tear gas and deployed water cannon, before making mass arrests inside train stations.

Police had banned a planned demonstration in the financial hub on security grounds, but tens of thousands defied authorities Saturday to march through the city's main highways for the 13th consecutive weekend.

The rally quickly descended into violent clashes with riot police which stretched into the early hours of Sunday, with officers pursuing protesters into metro stations and making mass arrests.

Video footage captured by local media showed elite police charging and pepper-spraying two couples cowering on the floor of a train compartment, with one man crying in anguish as he wrapped his arms around a friend.

A small group of hardcore protesters surrounded the city's parliament, unleashing a barrage of rocks and petrol bombs at riot police, who responded with tear gas and rubber bullets.

Thick, black smoke swirled from a large fire started by masked demonstrators at a barricade on a major thoroughfare, close to Hong Kong police headquarters.

Police dispersed crowds with water cannon as the night spiralled into a cat-and-mouse chase across the city, with police making numerous arrests.

"With such escalating violence and progressively lethal weapons of protestors, the safety of police officers and other members of the public is seriously threatened," police said in a statement.

Police said officers fired two warning shots into the sky after being attacked by group of "violent protesters who attempted to once snatch police pistols".

As protesters streamed into a nearby metro, graffiti on a pillar inside the station read: "We shall never surrender."

The hospital authority said Sunday that 31 people were admitted with injuries following the clashes, including five who remain in a serious condition.

Protesters were preparing to demonstrate again on Sunday, with plans to rally at a bus terminal outside the city's airport, with disruption also expected at train stations enroute to the airport.

The months-long protests were sparked by an attempt by Hong Kong's Beijing-backed government to pass a now-shelved bill which would have allowed extradition to China.

But they have expanded into a wider pro-democracy push, bringing millions to the streets in peaceful marches but also groups of hardcore protesters clashing with police.

At least five high-profile activists and three lawmakers were arrested on Friday in a sweep that rights groups said was taken directly from Beijing's playbook.

Two of the Umbrella Movement's leaders, Joshua Wong and Agnes Chow, were among those arrested, charged and bailed for "inciting others to take part in unauthorised assembly".

Police denied the sweep was timed specifically to weaken the weekend's protests.

The European Union's diplomatic chief Federica Mogherini said the developments were "extremely worrying", while US President Donald Trump said his economic pressure on China was forcing Beijing to take a more moderate line on Hong Kong.

The weeks of violence have damaged Hong Kong's reputation for stability and prosperity.