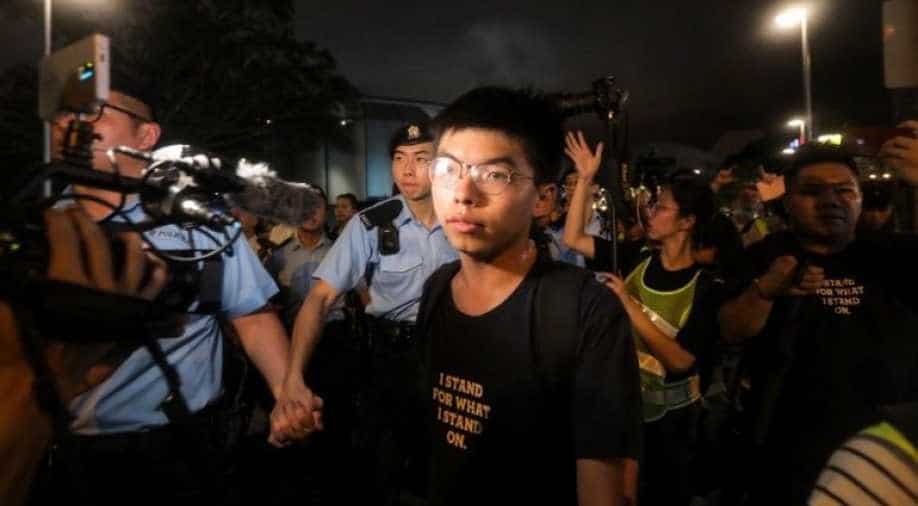 Leading Hong Kong democracy activist Joshua Wong was arrested Friday, his party said, a day ahead of a planned rally in the city that has been banned by the police.

His arrest came just hours after the reported detention at Hong Kong's airport of a vocal independence campaigner, and as Beijing continues to pile pressure on the anti-establishment movement in the city.

"Our secretary-general @joshuawongcf was just arrested this morning at roughly 7:30," Demosisto tweeted. "He was forcefully pushed into a private minivan on the street in broad daylight. Our lawyers following the case now."

BREAKING: Our secretary-general @joshuawongcf was just arrested this morning at roughly 7:30, when he was walking to the South Horizons MTR station. He was forcefully pushed into a private minivan on the street in broad daylight. Our lawyers following the case now.

There was no immediate confirmation of Wong's arrest, and police did not respond to multiple calls.

More than 850 people have been arrested in connection with the recent protests since June, including prominent independence campaigner Andy Chan who was detained by police at Hong Kong airport on Thursday night.

Chan was arrested while trying to board a flight to Japan, the Hong Kong Free Press website reported, which cited a police spokesman saying he was suspected of rioting and assaulting an officer.

The party numbers only a few dozen members, but Beijing sees calls for independence as an absolute red line.

Hong Kong has been wracked by three months of political unrest, with huge, peaceful demonstrations interspersed by episodes of violence between police and protesters.

Saturday marks the fifth anniversary of Beijing's rejection of a call for universal suffrage in the city, a decision that sparked the 79-day Umbrella Movement led by mainly young protesters including Wong.

Permission for a mass rally on Saturday was denied on security grounds, raising the likelihood of another weekend of clashes between police and protesters, who will likely come out in defiance of the ban.

In a letter to the rally organisers the Civil Human Rights Front (CHRF), police said they feared some participants would commit "violent and destructive acts".

The protests ignited when the city's Beijing-backed government tried to pass a bill allowing extraditions to mainland China.

But they have evolved into a wider call for greater democracy and an investigation into allegations of police brutality.

Protesters say freedoms in the semi-autonomous city, unique within China, are being eroded by Beijing.