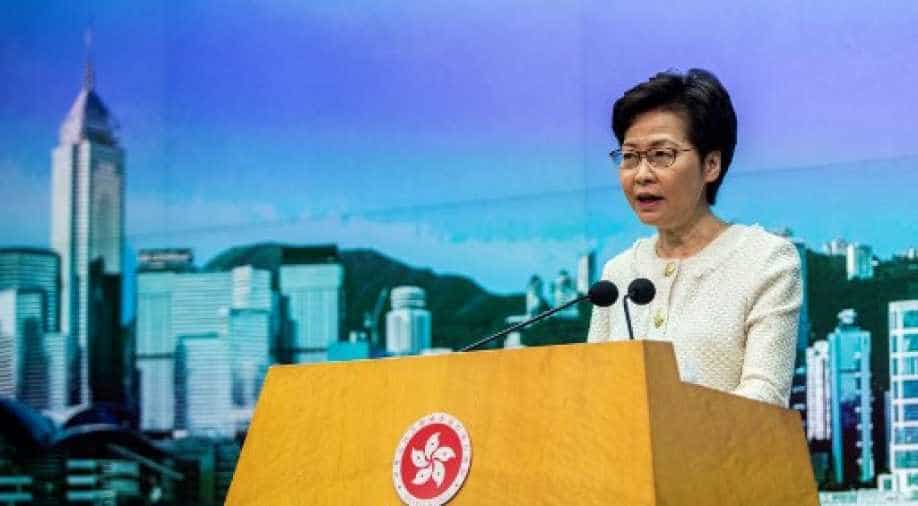 Hong Kong Chief Executive Carrie Lam speaks to the media about the new national security law introduced to the city at her weekly press conference in Hong Kong on July 7, 2020. Photograph:( AFP )

Lam's postponement of the vote comes after 12 pro-democracy candidates were disqualified from running in the poll, for reasons including perceived subversive intentions, opposition to a new security law and campaigning to win a legislation-blocking majority.

Hong Kong leader Carrie Lam on Friday postponed a Sept. 6 election for seats in the city legislature for a year because of a spike in novel coronavirus cases, dealing a blow to the pro-democracy opposition hoping to make gains in the vote.

The opposition was hoping to win a historic majority in the Legislative Council, where only half the seats are directly elected and the other half filled mostly by pro-Beijing appointees.

Lam's postponement of the vote comes after 12 pro-democracy candidates were disqualified from running in the poll, for reasons including perceived subversive intentions, opposition to a new security law and campaigning to win a legislation-blocking majority.

The poll would have been the former British colony's first official vote since Beijing imposed a new security law in late June, which critics say aims to quash dissent in China's freest city.

Hong Kong returned to Chinese rule in 1997 under a guarantee of autonomy but critics say the new law undermines that promise and puts the territory on a more authoritarian path.

The city's democracy camp has come under sustained attack since Beijing imposed a sweeping national security law on the city last month, a move China's leaders described as a "sword" hanging over the head of its critics.

The ensuing weeks have radically transformed a city used to speaking its mind and supposedly guaranteed certain freedoms and autonomy in a "One Country, Two Systems" deal agreed ahead of its 1997 handover from Britain.

Hong Kong is not a democracy, its leader is chosen by pro-Beijing committees. But half of its legislature's 70 seats are directly elected, offering the city's 7.5 million residents a rare chance to have their voices heard at the ballot box.

Planning to capitalise on last year's huge and often violent anti-Beijing protests, democracy activists had been hoping to win their first-ever majority in September. But officials have begun scrubbing ballot lists of candidates.

Examples given by authorities of unacceptable political views have included criticising a new security law imposed by Beijing, campaigning to win a legislation-blocking majority and refusing to recognise China's sovereignty.

Earlier in the day a coalition of democracy parties warned any bid to delay the elections would be herald "the complete collapse of our constitutional system.

Around half of Hong Kong's 3,100 COVID-19 cases have been detected in the past month and authorities fear hospitals are on the verge of being overwhelmed.

According to the International Institute for Democracy and Electoral Assistance, at least 68 elections worldwide have been postponed because of the virus, while 49 went ahead.

Hong Kong is going through its most politically turbulent period since its return to Chinese rule, and last year seven straight months of pro-democracy protests swept the city.

The pandemic and mass arrests have helped throttle the movement, but anger towards Beijing still seethes.