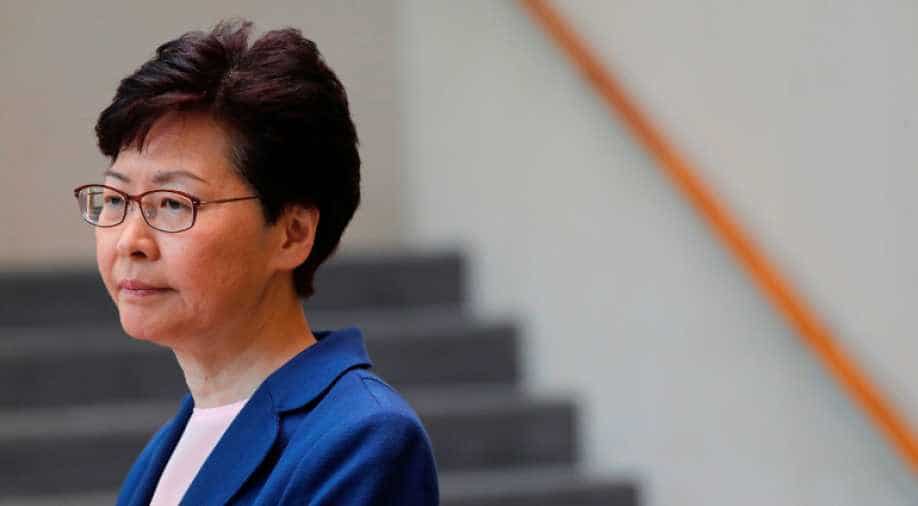 The embattled leader abruptly announced a press conference after meeting business leaders as demonstrators rallied at the airport, with the protest movement entering its third month

Hong Kong's leader Carrie Lam warned Friday that two months of pro-democracy demonstrations were causing economic chaos in the city but ruled out making concessions to "silence the violent protesters."

The embattled leader abruptly announced a press conference after meeting business leaders as demonstrators rallied at the airport, with the protest movement entering its third month.

Lam, whose support for a bill to allow extradition to mainland China sparked the crisis, warned that the economic impact of the unrest threatened to be worse than the 2003 SARS outbreak in the financial hub.

"The downturn this time came very quickly. Someone described it as coming like a tsunami," Lam said.

"Compared to the economic downturn caused by SARS that we handled previously, which caused an economic storm, the situation this time is more severe."

"In other words, the economic recovery will take a very long time," she added.

While Lam is a figure of hatred for many pro-democracy activists, her comments echo worried statements from the private sector and the tourism industry in particular.

Hong Kong carrier Cathay Pacific has warned bookings are down, travel agencies have reported drops of up to 50 percent in group tour bookings and the tourism board reported double-digit declines in visitor arrivals in the second half of July.

Protesters have continued to stage almost daily rallies despite increasingly violent confrontations with police that have prompted several countries to issue Hong Kong travel warnings for their citizens.

On Friday, thousands of pro-democracy protesters staged a sit-in at the airport to bring their message to arriving visitors.

Lam has suspended the bill that sparked the crisis, but has not yet responded to protester calls to withdraw it altogether, and she has brushed aside demands for an enquiry into police brutality.

She ruled out meeting the demands of protesters, which also include a call for the direct election of the city's chief executive, currently chosen by Beijing.

"As far as political solution is concerned, I don't think we should just sort of make concessions in order to silence the violent protesters," she said.

She said the way for the economy to begin recovering was to "stop the widespread violent actions now appearing in Hong Kong."