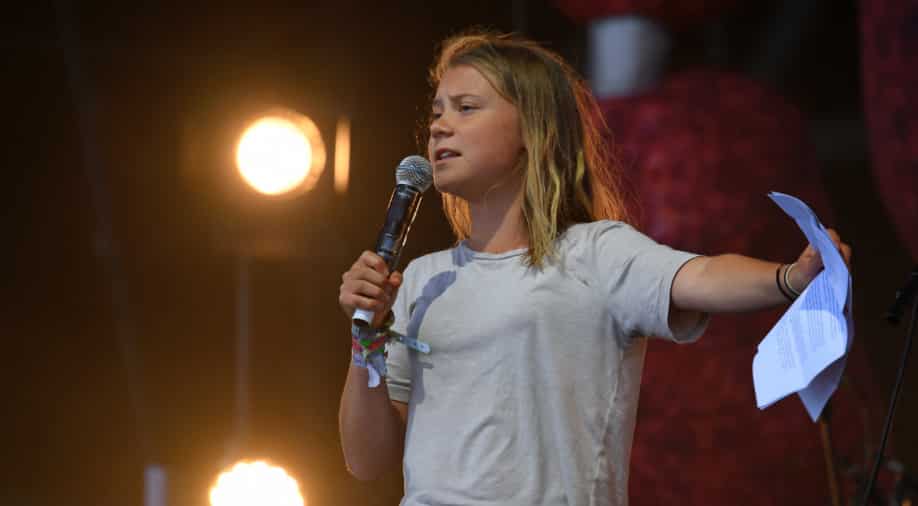 Thunberg claimed that the world leaders are to be blamed for failing to stop the climate emergency and for developing “loopholes” that allow ecological destruction to go unaddressed. Photograph:( AFP )

Emily Eavis, co-organiser of the Glastonbury festival invited Thunberg to the stage by describing her as, "the most inspiring speaker of this generation”

The 19-year-old climate activist, Greta Thunberg made a surprise appearance at the Glastonbury festival, with a warning regarding a potential “total natural catastrophe” unless citizens take immediate action.

After a moving speech from the Pyramid stage which was painted with an apocalyptic image of the future of the planet, Thunberg also led chants of "climate" and "justice" with cheers from thousands of people at the festival.

"We are approaching the precipice and I would strongly suggest that all of those who have not yet been greenwashed out of our senses to stand our ground. Do not let them drag us another inch closer to the edge. Right now is where we stand our ground," The Guardian quoted Thunberg.

Emily Eavis, co-organiser of the Glastonbury festival invited Thunberg to the stage by describing her as, "the most inspiring speaker of this generation”.

Thunberg claimed that the world leaders are to be blamed for failing to stop the climate emergency and for developing “loopholes” that allow ecological destruction to go unaddressed.

"It has not only become acceptable for leaders to lie, but it’s also almost what we expect them to do," she added.

The surprise in-person speech by Thunberg was announced on Saturday.

The climate activist said, "It is taking action. It is stepping outside your comfort zone. And if a bunch of school kids was able to get millions of people on the streets and start changing their lives, just imagine what we could all do together if we try."

Thunberg said that it was high time for society to start “creating hope” rather than waiting for it to arrive.

"Hope is not something that is given to you. It is something you have to earn, to create. It cannot be gained passively from standing by passively and waiting for someone else to do something."

Thunberg's main intention to make a surprise appearance at the festival was to urge the people to make efforts to halt global warming before it is too late.

"These crises are the biggest story in the world. And it must be spoken as far and as wide as possible, as far as our voices can carry and even further still. It must be told in the articles, newspapers, movies, and songs; at breakfast tables, lunch meetings, family gatherings; in lifts and bus stops; and in a rural shop and music festivals like Glastonbury," she added.