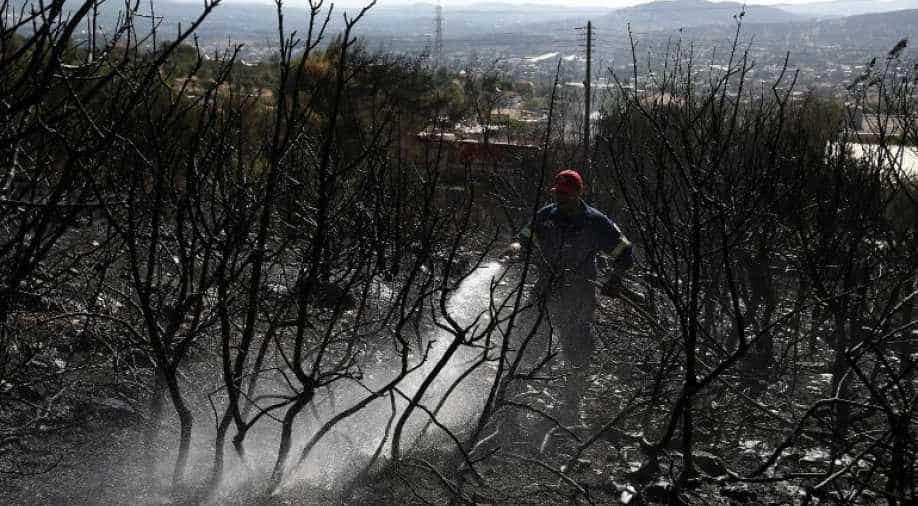 A firefighter pours water through a hose as during a wildfire on Mount Hymettus, near Athens, Greece. Photograph:( Reuters )

A massive force of nearly 400 firefighters backed by more than 100 vehicles, nine planes and four helicopters remains in the area.

Firefighters in Greece on Friday made progress against a four-day wildfire on the island of Evia that has burned through a pine forest and threatened villages, officials said.

"The situation looks better today, there is no active front, but our forces remain in place," a fire department spokesman told AFP, adding that there were still "pockets of fire" smouldering in a ravine.

A massive force of nearly 400 firefighters backed by more than 100 vehicles, nine planes and four helicopters remains in the area.

Two water bombers from Italy and one from Spain are assisting the effort, the spokesman said.

"It's quite a large perimeter that needs to be monitored," civil protection spokesman Spyros Georgiou told AFP.

But as the situation was improving, the Italian and Spanish crews would be withdrawn from the operation by the evening, he said. They are to be decorated by the agency for their assistance on Saturday.

Rain is expected in the area on Saturday.

State agency ANA said the fire, which broke out Tuesday, has burned some 2,400 hectares (5,600 acres) including more than 1,000 hectares of dense pine forest.

"We should be able to have a clearer picture of the exact damage on Monday," Georgiou said.

After touring the area earlier in the week, he said that there was confirmed damage to animal pens and beehives.

A firefighter was hospitalised with burns on Tuesday, and at least four cars have been burned.

Authorities suspect arson was involved as the fire broke out in three separate locations near the village of Makrymalli.

Two Greek men were arrested Thursday on suspicion of setting fires in the Peloponnese peninsula.

A third Greek man was arrested in the same area on Friday.

Greece has been hit by a spate of wildfires since the weekend, fanned by gale-force winds and temperatures of 40 degrees Celsius (104 Fahrenheit).