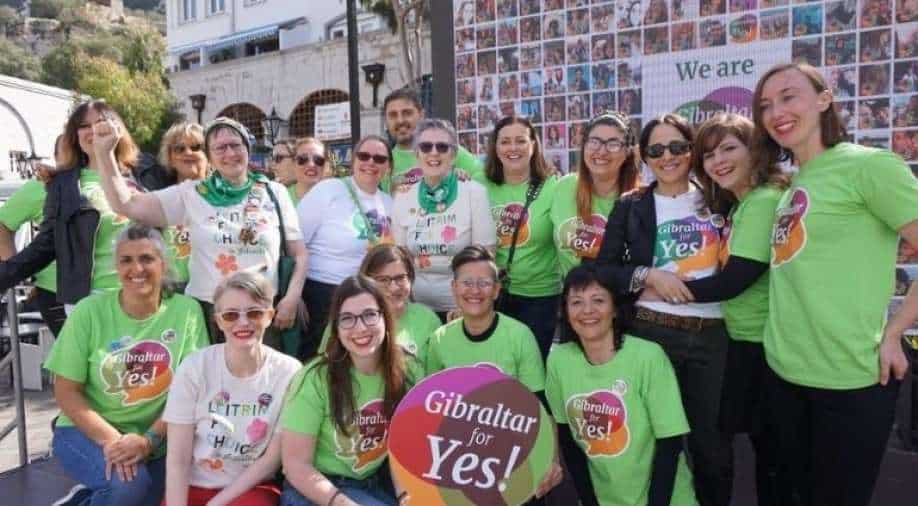 The referendum was initially slated for March 19, 2020, but was postponed as virus cases began spiralling at the start of the pandemic

Gibraltar was voting Thursday on plans to ease draconian abortion laws in a referendum delayed for over a year by the coronavirus pandemic.

The issue has exposed sharply opposing views within the tiny, normally closely-knit British enclave at the southernmost tip of Spain, which is home to some 32,000 people.

The referendum was initially slated for March 19, 2020, but was postponed as virus cases began spiralling at the start of the pandemic.

After the polls opened at 9:00 am (0700 GMT), a line of socially distanced voters waited to cast their ballots at Inces Hall theatre, its facade covered with a vibrant mural.

Heading towards the theatre, voters passed two banners, one with a scan of an unborn baby saying "Their lives are in your hands. Vote no!" and a smaller green placard reading "Yes for care compassion and change."

Except in cases where it would save the mother's life, abortion is currently banned in Gibraltar on pain of life imprisonment, although such a penalty has not been applied in modern times.

The government is proposing changes to the law to allow abortion where a woman's mental or physical health is at risk, such as in cases of rape or incest, or when foetuses have fatal physical defects.

"It’s very important to give value to every single life, and yes of course, women have got rights, but so have the babies," 67-year-old pensioner Marie-Luisa Bruzon told AFPTV after voting against it.

Although the changes have already been approved by Gibraltar's the referendum will decide whether or not the amended law is brought into force.

Under the changes, a woman would be able to undergo an abortion up to 12 weeks into her pregnancy if her mental or physical health is deemed at risk, or beyond if such damage would be grave and permanent.

The question voters must answer is: "Should the Crimes (Amendment) Act 2019, that defines the circumstances which would allow abortion in Gibraltar, come into force?"

"This law is very extreme. It removes all protection from unborn children all the way up to the nine months," Karenza Morillo, a "No" campaigner told AFPTV.

"On paper it looks restrictive but in practice it will not be."

But Celina Victory, a 19-year-old campaigner for a "Yes" vote said the opposite.

"It’s not going to open the gates to abortion on demand at all," she said.

"There is a broad range of grounds before 12 weeks, which is fine and we don’t have an issue with that. It is still stricter than most of the legislation in Europe."

Until now, women wanting to have an abortion have had to travel to Spain or Britain to undergo the procedure.

If the changes are approved, the law is expected to take effect fairly quickly although officials have not yet laid out a timeline.

Ahead of the vote, Chief Minister Fabian Picardo and two other party leaders released a video urging people to vote "Yes".

"My personal, professional & political opinion on the abortion referendum: it is in #Gibraltar's best interests to #VoteYes on Thursday 24th June," Picardo tweeted.

1/2 My personal, professional & political opinion on the abortion referendum: it is in #Gibraltar's best interests to #VoteYes on Thursday 24th June. I have joined with Joseph Garcia & Marlene Nahon MP to record this message supporting @GibraltarforYes #NoMoreShame #TrustWomen pic.twitter.com/BWGPABWxoZ

The proposed changes came after Britain's Supreme Court ruled in June 2018 that Northern Ireland's abortion laws, which at the time were almost identical to Gibraltar's, were incompatible with the European Convention on Human Rights.

"It is therefore clear that if the equivalent law on abortion in Northern Ireland was in breach of the Convention, our identical, archaic law is too," wrote Picardo in Wednesday's Gibraltar Chronicle.

"It is our duty to vote to stop this ongoing breach."

Picardo has said he believed the changes are long overdue and would be approved "by a very large majority".